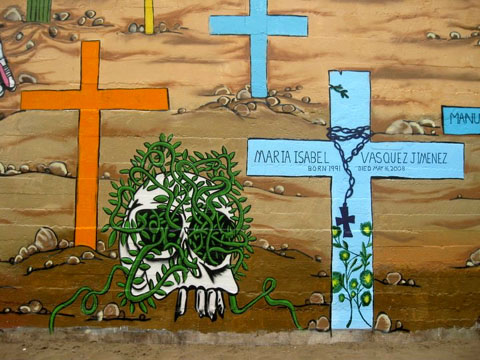 This cross is dedicated to Maria Isabel Vasquez Jimenez who died of heat
after a 9 hour shift without adequate breaks and water in the fields. She
was 17 and pregnant. The owners not only failed to follow the law or react in
a timely and proper manner. They coerced her farm worker fiance to lie
about what happened to hide that they employed a minor. She is one of the
67 percent we seek to lift up and demand that officials in Washington, D.C., address.
Rest in Peace.
–  by Pablo Paredes, AFSC Youth Outreach Coordinator

[dropcap]“N[/dropcap]o Human Being is Illegal—Y Cada uno Tiene un Sueno (Each One Has a Dream).” That is the powerful theme of a new mural gracing the walls of the Friends Meeting and the offices of American Friends Service Committee at 65 Ninth St. in San Francisco. This strikingly beautiful mural is 100 feet wide and 30 feet tall.
For the past year, Pablo Paredes, youth outreach coordinator of the American Friends Service Committee (AFSC), has been working with a group of high school students who have dedicated themselves to bringing the voices of underprivileged and undocumented youth into the debate on immigration reform by building community, documenting their stories, building alliances, educating potential allies, and advocating for change.
The group calls themselves 67 Suenos after the 67 percent of migrant youth whose dreams are not reflected in any of the common narratives regarding immigration reform. They coalesced as the nation was debating the passage of the “Dream Act.”

Many dedicated allies were campaigning for the passage of the “Dream Act” without knowing that the act had been changed, leaving an estimated 67 percent of undocumented youth no option for pursuing a “pathway toward citizenship.”
This new mural — with its images of indigenous symbols, the crosses of those who died while trying to cross the border, and a vibrant central image of youth leading a renewed movement for justice — is a passionate statement from the youth that neither politicians nor allies can ignore.
Pablo Paredes said, “Creating a strong piece of art in a public space changes the consciousness.” Certainly, for those of us who worked on the mural, it has been an experience that borders on the level of magic or even a miracle.
We didn’t have an auspicious beginning. Even receiving a key to gain access to the vacant lot was a challenge that required jumping endless hoops that included securing certificates of insurance, signing a licensing agreement with a large absentee landlord, and then waiting for the delivery of the key.


The key allowed us access to a monumental wall in a lot littered with refuse that symbolizes a neighborhood inhabited by people that many would like to forget. As we waited for delivery of the lift that gave us access to the upper reaches of the wall, we picked up bags and bags of trash filled with broken glass, needles, human waste, and other detritus of urban decay.
We thought things were looking up when the lift/boom was delivered; we could now paint the whole wall. But, to our dismay, as soon as we drove the lift onto the lot we found ourselves stuck in the sand. When the delivery truck drove onto the lot to pull it out, the driver got stuck as well. Over the next two days, five vehicles mired themselves in the sand as the company tried to prove that the lift was appropriate for the site.
Eventually, we went to the lumberyard and bought multiple sheets of plywood and used the boards to create a path to move the lift to the wall. Once we got to the wall, we felt enormous relief, but we soon encountered another major problem. Our muralist was unable to produce an image that resonated with the group.


We were at the point of giving up. Then Pablo Paredes met Pancho Pescador at the Berkeley Farmer’s Market. As they talked, Pablo discovered that Pancho is an experienced muralist who works with youth in Oakland painting murals. He thought he could produce an image from the notes that Pablo sent him about the group’s ideas.
Two days later, Pancho showed up at the AFSC office with a drawing that everyone recognized as the image they had been waiting to see. It also turned out that Pancho was no stranger to the group. Rather, he was a beloved teacher from one of the youth’s middle school and a mentor to her younger brother. From that point on, we saw and experienced the magic.
We held a painting party that drew people from far and wide. Quakers came from Sacramento, Palo Alto, San Francisco and the East Bay to work on the mural. Tourists stopped to ask if they could help. One family traveling through from Canada spent the day. Allies from the community painted, and individuals who recognized the images stopped to tell their stories, including a young man who had buried his friend in the desert.
As the weeks passed, endless numbers of people stopped to take pictures, yell their appreciation, and offer to help. One young man spent two weeks cleaning the lot, picking up litter that was ground in but still potentially dangerous to volunteers. Some of our homeless neighbors became members of the daily painting team.


Finally, on Friday evening, August 26, we celebrated the unveiling of the mural with hundreds of allies, well wishers, friends and families. The 67 Suenos were radiant as they stood in front of the crowd as many cameras snapped pictures.
The young people excitedly described the process of creating art, and shared their purpose and their dreams. They were poised, articulate, and proud. They had worked hard, putting in many more hours than could reasonably be expected.
They knew they were instrumental in creating a piece of art that is not only beautiful, but carries a message that every politician needs to hear and that everyone of us needs to acknowledge: No Human Being Is Illegal — Y Cada Uno Tiene un Sueno.

Sandra Schwartz is the peace education coordinator of the American Friends Service Committee.