Many people think of the phrase “drug war” as rhetorical, or maybe that it is about the mass incarceration and criminalization of Black people and other people of color in the United States. It is, of course.
But the full-scale war in Mexico — it’s the country with the second most deadly conflict in the world — is mostly invisible to folks in the United States, unless you have family there.
Yet more than 150,000 people have been killed in Mexico since former president Felipe Calderón declared a drug war, with U.S. support, in 2007. Another 27,000 approximately — the government gives conflicting data — have been forcibly disappeared.
In response to the human rights crisis experienced by Mexicans and Central American migrants in Mexico, and the profound role played by the United States in this crisis, the American Friends Service Committee organized a two-week fact-finding mission to Mexico in June 2016. As a U.S.-based delegation of 16 peace, social justice and human rights advocates, we wanted to understand the impact of U.S. military programs and arms sales to Mexico, and to obtain firsthand accounts of the increased collaboration between the United States and Mexico in their effort to curb immigration flows on Mexico’s southern border.

Her Sons Were Disappeared

I met Doña María Herrera four years ago, during a pilgrimage across the United States by victims of the drug war in Mexico. Doña María has eight children, but four of her sons were forcibly disappeared in 2009 and 2010. The second two were disappeared while they were searching for the other two.
A person is taken, arrested, or abducted against her or his will, and then not seen again. Nor do authorities recognize knowing of the person’s whereabouts, though state agencies may be responsible. This is a forced disappearance.
The Mexican government records nearly 27,000 disappearances since 2007, but evidence points to several times that many, largely because these figures exclude “kidnappings,” and because only a small portion of kidnappings are reported. Many kidnappings involved state responsibility through support or acquiescence; the Open Society Justice Initiative estimates that kidnappings exceeded 580,000 from 2007 through 2014.
Why are persons forcibly disappeared? Historically, state forces targeted dissidents and activists for political reasons, in order to terrorize opposition. The Mexican state of Guerrero is Mexico’s poorest, yet also includes the tourist mecca of Acapulco and extensive gold mining. In response to a small guerrilla insurgency in Guerrero in the 1960s and 1970s, the Mexican Army deployed in Guerrero and stayed on after defeating armed groups.
Today, the Army is deployed in counter-drug operations in Guerrero, which grows poppies that are made into opium and heroin. One veteran activist told us that the Army itself had brought poppies to Guerrero. Armed forces still target activists with counterinsurgent warfare.

The most well-known example is the forced disappearance by police — while the Army watched from a surveillance center — of 43 student teachers of Ayotzinapa in September 2014. The Ayotzinapa school has a long tradition of training teachers for poor communities, including bilingual education for indigenous communities, and of militant protest. The massive crime against the 43 students has continued to stir a national and international outcry.
Family members and human rights organizations have persisted in pressing to find the young men, clarify what happened, and bring those responsible to justice. The Mexican government has denied responsibility and shut down an effective investigation by experts assigned by the Inter-American Human Rights Commission.
There are other motives and players for violence against communities: criminal organizations, often in collusion with government officials, also abduct persons for ransom, for forced labor, and for human trafficking for the sex trade. Many violations are tied to the interests of multinational companies operating in Mexico, especially mining companies.
Family members of disappeared persons we spoke with represented broad classes of people: middle-class Christian women, poor indigenous communities, urban doctors and other professionals, and people recently moved to a new state. Some had no idea why their loved ones had been targeted. But a universal aspect of their stories was the absolute refusal of state officials to help them find their children, husbands, wives, or siblings.
“In terms of its purpose to care for, to guard, to protect people’s human rights,” Sister Leticia Gutiérrez told us, “the state’s policy is to do nothing, to not recognize anything happening. That is its policy.”

Because state agencies have refused to investigate where the remains of people disappeared and killed are located, much less bring to justice those responsible, families and communities increasingly have begun their own investigations and uncovered a growing number of clandestine graves.
In Guerrero alone, 60 such mass graves have been identified. Doña María’s son, Juan Carlos, told us how they have gone to churches to tell their story and seek support, and after passing a collection jar would find a slip of paper someone had deposited that described in detail where a grave could be found. Using such outreach, the group located more mass graves than the government itself, in a shorter period. Yet identification of remains has been paralyzed by the state’s refusal to establish a DNA database.
Many indigenous communities have also taken it on themselves to form community police to patrol and detain people committing crimes. This has worked well in communities that maintain cultural traditions and are socially cohesive, but in other places, organized crime or government forces have attempted to co-opt the community police ‘brand’ to fight their rivals, further complicating matters.

In this desperate situation, the United States has used its usual approach: help the military and police, while keeping up a discourse on human rights. The U.S. State Department’s own human rights report on Mexico for 2015 acknowledges that “law enforcement and military involvement in serious abuses, such as unlawful killings, torture, and disappearances.”
Yet the United States gave training to more than ten thousand Mexican police and soldiers between 2011 and 2014, mostly at clandestine sites in Mexico, and continues to do so. Mexican federal police participated in Urban Shield, the Homeland Security-funded SWAT competition and military expo hosted last month by Alameda County Sheriff’s Office.
U.S. training and other aid is by law subject to respect for human rights, but application of these human rights law is not transparent, either in Mexico or in the United States.

One Billion Dollars of Weapons from U.S.

Washington has sold more than $3 billion worth of military weaponry to Mexico since 2012, increasingly as government-to-government sales.
A Pentagon official said of a billion-dollar sale for Blackhawk helicopters, “We didn’t sell them just helicopters. We sold them 15 years of working intimately together that we would not otherwise have.”
Mexican activists told us that statements and actions by people in the United States have an impact on Mexican authorities. These include letters in response to human rights appeals, visits to groups affected by violence, Congressional advocacy, and anything that appears in U.S. or Mexican media.
“A sign of hope is that a group in civil society is trying to organize from Central America, from Mexico,” Sister Leticia continued. “The big challenge is how U.S. civil society also gets something going, right?”
John Lindsay-Poland is the Wage Peace Coordinator of the AFSC in San Francisco. He can be reached at jlindsay-poland@afsc.org.
***   ***   ***   ***   *** 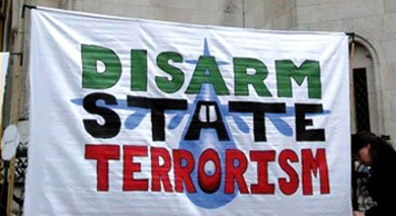 Caravan Against Repression in Mexico

Nov. 3-5 in the Bay Area
Activists, mostly women, from Ayotzinapa, Ciudad Juarez, the teachers union that suffered a police massacre during a protest in June, and other social struggles will participate in a Caravan Against Repression in October and November. AFSC has joined with groups led by Mexican students to receive the Caravan.
To hear them speak and support them visit www.contrarepresion.org or contact Luis López (resendiz03100@gmail.com) or Blanca Missé (petitmercure@yahoo.fr).