[dropcap]“W[/dropcap]e raise our voices to honor the legacy of Dr. Martin Luther King, Jr. and continue to work in fighting for the civil rights of the most marginalized of our society.” — Ibrahim Mubara, Portland’s Right 2 Survive, WRAP
With microphone in hand, Bilal Ali, human rights organizer for the Right to Rest campaign, was standing in front of two large banners, one saying, “Black Lives Matter,” and the other “A Right Delayed is a Right Denied.”
At a direct action for the Homeless Bill of Rights held in San Francisco on Sunday, January 18, he described the draconian laws that the Right to Rest bill will help eliminate. “The laws today that criminalize homelessness and poverty are an extension of those laws,” Ali said, calling out the names of the cruelly repressive Jim Crow, Sundown Towns, and anti-Okie laws that have snaked their way across America for over 40 years.
“We are here to let San Francisco know that we will resist these laws. We will resist any law that criminalizes the bare necessities of life activities and the basic existence of our people!”
The Right to Rest Bill, also known as the Homeless Bill of Rights, is making its way to legislators in three states: California, Oregon and Colorado. Advocates for the bills are fired-up grassroots organizers led by Western Regional Advocacy Project.
“Our campaign is now active in four states and acting in partnership with 135 organizations and thousands of individuals,” says WRAP Executive Director Paul Boden. The multi-state actions in several cities included sleep-outs, marches, a “poor people palooza” and a film festival. 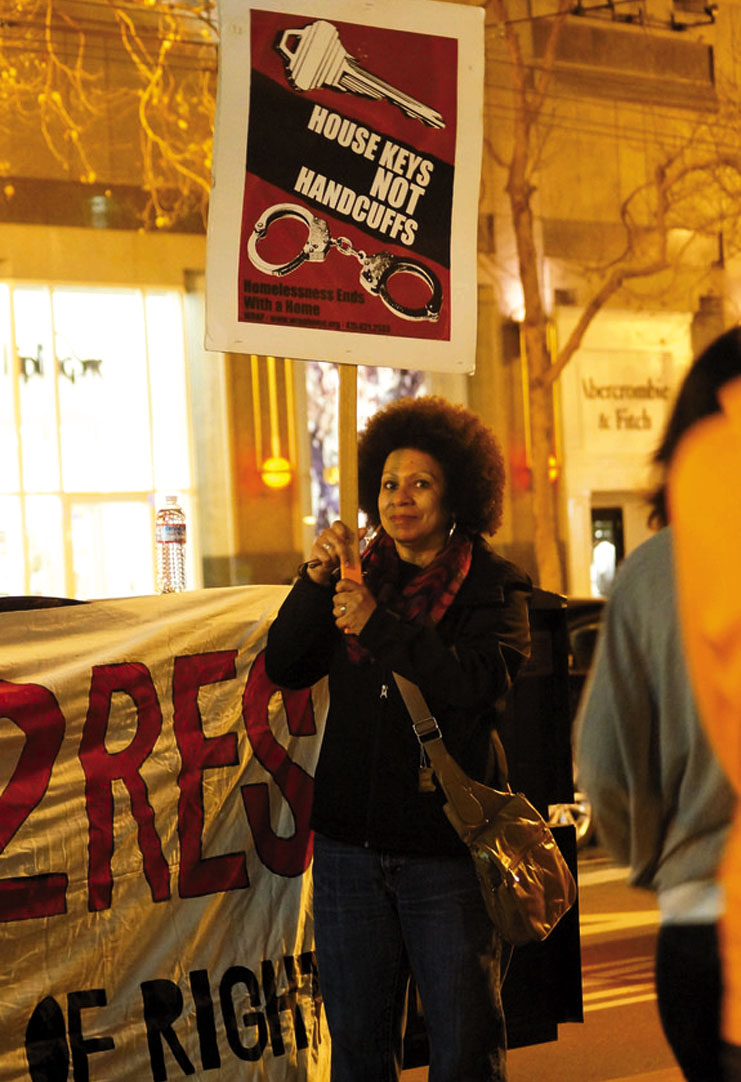 The San Francisco action, held at the Powell Street BART station, was in collaboration with Black Lives Matter and the birthday of Martin Luther King Jr. Advocates and speakers from various parts of the homeless community spoke about the need to pass the Right to Rest bill now.
Laura Slattery from the Gubbio Project, a sanctuary for homeless people at St. Boniface Church in the Tenderloin, described how the Right to Rest bill is connected to the work of Martin Luther King and the Poor People’s Campaign.
She said, “After the death of King, 3,000 people set up tents in Washington, D.C., for the Poor People’s Campaign. For six weeks they were there.” King felt that we needed to focus more on addressing the needs of the poor. She added, “And that’s what we are doing today.”
“You can’t criminalize people for being people. It’s a human dignity thing!” said Gwen Austin, community organizer from Building Opportunities for Self-Sufficiency, a WRAP member organization. “We are behind this (the Right to Rest Bill) 1000 percent!”
Youth are often harassed and traumatized on the streets. Shira Noel, an organizer from the Homeless Youth Alliance in San Francisco, described the drop-in center they had created to provide youth a refuge from the streets. “It was a space for kids by the kids,” she explained. But this badly needed refuge for low-income youth met an ill-fated end.

“After 12 years, in 2013,” Noel said, “we closed the doors of our drop-in center, not because we had no money, but because the building owners saw a trend in San Francisco. They went after a different class of tenants with more money.”
Noel also shared that many of the young people who end up on the streets are escaping abusive or neglectful homes, while others have been abandoned. A startling statistic is that almost half of our street youth identify as LGBT.
“Gentrification and anti-homeless laws make their survival a lot tougher,” Noel said. “Despite it all, they are still here — and rightfully so.”
After being turned down by landlords 38 times, the street youth drop-in center is still looking for a home. At one point, they had set up services on the sidewalk in front of their old building to help the youth.
Woods Ervin, the Administrative Director of the TGI Justice Project in San Francisco, described the many forms of oppression and criminalization experienced by trans homeless people in San Francisco. “We struggle with access to restrooms and shelters,” Ervin said. “We regularly experience criminalization on the streets by police. Fighting for the Right to Rest bill will give us more access to things we need and deserve — the ability to walk down the street without harassment, to have housing that works for us and to not be locked up or harmed by police.”
Anti-homeless laws result in increased instances of unnecessary incarceration. Nicole Deane from Critical Resistance spoke directly to this issue: “Most of the folks that are locked up in San Francisco jails are pre-trial. They are there because they cannot afford bail, which means the city locks up people because they are poor.”
According to Eric Ares, an activist with Los Angeles Community Action Network, “Recent court rulings have shown that these types of laws are not only immoral and unjust, but illegal. They do not stop crime, but rather punish people for being poor and homeless.” Ares went on to say, “Cities are not going to ticket their way out of homelessness. Housing is the only solution.”


Paul Boden, the final speaker at the rally, roused the crowd as he shared the central theme of the Right to Rest campaign. “You (speaking to city officials) will not continue to criminalize poor people, day laborers, people of color, people that live in SRO hotels that hang out on the sidewalks in front of their own home! Houseless people! We have campaigns running in four states to stop criminalizing: Sitting! Standing! Eating! Sleeping! And who the hell doesn’t sit, stand, eat and sleep!! The people writing these laws do that, the people enforcing these laws do that!”
WRAP’s Right to Rest Days of Action have taken place in San Francisco, Oakland, Portland, Los Angeles, Sacramento, Chico and other cities. WRAP stands in solidarity with the Black Lives Matter movement and all groups fighting unjust, violent law enforcement.
The movement has just begun.
Editor’s Note: This article mistakenly used a gender-based pronoun to refer to a member of the TGI Justice Project in San Francisco. Street Spirit apologizes for that error, and we are committed to correctly identifying trans persons and supporting the process that creates trans liberation in print and on the streets.

Street Spirit will be publishing continuing coverage of the campaign in our Right to Rest section with campaign action alerts on our Facebook page.

Read Janny Castillo’s Struggling on the Streets Without the Right to Rest a snapshot of a woman denied the right to rest.