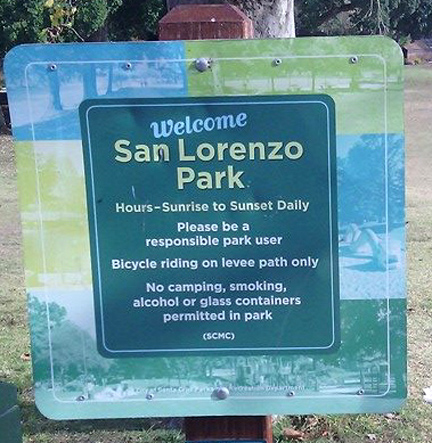 The welcome sign at San Lorenzo Park seems ironic in light of the stay-away ordinance aimed at homeless people.

[dropcap]I[/dropcap] discussed the need for a Citizens Police Review Board to provide a voice for people experiencing homelessness in Santa Cruz in my article, “Civilian Police Review Could Help Homeless People” [see the May 2014 issue of Street Spirit].
Although I still believe that a police review board would be an effective tool in combating the criminalization of homelessness in Santa Cruz, I believe that the events presently unfolding call for a shift in strategy from civic action to court action.
Santa Cruz Municipal Code Section 13.08.100 (as amended) is the most recent iteration of retrogressive lawmaking aimed at our homeless community. It is presently making its way through the City Council approval process.
The new law is an extension of an ordinance approved last June which provided for the issuance of 24-hour “stay away” orders to people who posed some arguable “public health or safety concern” within the city’s parks and open spaces.
The proposed amendment, however, goes much further and raises serious concerns about the constitutionally guaranteed right to peaceably assemble in traditional public spaces, the right to due process of law and the collective right of people experiencing homelessness to simply exist.
As passed by the City Council on October 14, this amended ordinance would permit Santa Cruz Police Officers and City Park Rangers to issue “stay way” orders to “habitual” offenders which will effectively prohibit assembly or even physical presence in designated public spaces for up to a year.
Leaving aside for the moment the fact that this ordinance as amended targets the poor, people of color and the unemployed almost exclusively, the practical reality is that this legislative fiat conjured up by the council is nothing more than a not so thinly veiled extension of a policy to drive undesirables, i.e., people experiencing homelessness, out of our community.
Even more troubling than the broad discretionary power this ordinance cedes to law enforcement is the fact that a violation of an Order of Court as provided by this ordinance may be prosecuted as a misdemeanor and could result in a jail term of up to one year and/or a substantial fine.
Robert Norse, a longtime homeless advocate and founder of HUFF (Homeless United for Friendship and Freedom), said the ordinance enables law enforcement officials to banish homeless people from public places, even when they have never been found guilty of any crime.
“Since the original 13.08.100 was passed in 2013,” Norse said, “many homeless people have been given one-day stay-aways along with their smoking, camping, or ‘park closed’ citations. This new law is designed to punish and exclude homeless people without the need to go to court and actually prove a crime.”
Becky Johnson, another founding member of HUFF, provided some historical perspective. “The City of Santa Cruz has been progressively criminalizing homelessness for decades, but this new ordinance raises that policy to an entirely new level,” Johnson said.
Here is where the need for a real discussion about new strategies to fight this elevated offensive against our homeless community begins in earnest.
It is being argued by some that public education and outreach may be the most effective tool to bring pressure to bear on the Santa Cruz City Council to reconsider the adoption of this wholly punitive ordinance. It has been suggested that public “speak outs” and petitions may also be effective tools.

But while these tactics may be noble efforts in their own right, it is my opinion that the most effective tactic to bring down this latest attack on the freedom of speech and freedom of assembly in our city is litigation — in common parlance, a lawsuit. And while I respect diversity of tactics, history has shown that litigation, even ultimately unsuccessful, can be a powerful tool in the fight against oppression and the targeted persecution of homeless residents.
Linda Lemaster, a founding member of Housing Now and herself a defendant in the Peace Camp 2010 homeless rights case, illustrates the point. “The battles fought in the courts of law are as important as the ones we wage in the court of public opinion.” Lemaster said. “And they are all the more powerful for the public stage they are played out on.”
And here is something else to consider. The courts may do what the current City Council will not: they can simply “press pause.” By this, I mean that a well-crafted argument before a fair and impartial court may well result in the issuance of a preliminary order “enjoining” enforcement of this ordinance until all the legal and constitutional concerns have been fully and properly addressed.
To cite just one example, the above-mentioned ordinance as drafted creates a high risk of “erroneous deprivation of rights” in that (1) the orders will be issued based on vague and overbroad protocols; (2) there is no clear or stated procedure to contest the issuance of any such order and; (3) individuals will have no meaningful access to due process of law before they are judged to be in violation.
Even the casual observer must concede that the law as presently amended is overbroad and poorly as well as hastily drafted. The council seems unwilling to consider the larger consequences of this law; a court of competent jurisdiction may well be.
While not committing to file a court action at this time, the local ACLU nevertheless issued a strong statement in opposition to the proposed ordinance.
“The Santa Cruz Chapter of the American Civil Liberties Union is shocked that the City Council is considering a resolution of this problem that involves banning individuals from a park or parks in general, for as long as a year, without any due process or procedure for a fair hearing in front of an impartial judge as to whether they actually committed the acts with which they are being charged or whether the punishment is appropriate for whatever transgression(s) they are cited for committing. This proposal is Constitutionally vague, lacks adequate due process protections, and is ripe for abuse. We sympathize with your need to address problem behavior … but we seriously hope you will find a different approach to addressing it.”
Many will say, and perhaps rightly, that the courts are poor places for the pronouncement of public policy. I say that courts are not merely constituted to prosecute the guilty but are more properly employed to protect the innocent or, in this case, the disenfranchised and disempowered.
But like anything else, it is not the system that determines our rights; it is how we use that system. I believe that we can use it to our advantage. Fundamental due process requires notice AND opportunity to be heard. Among its many flaws, the proposed “stay away” ordinance provides no procedure or process by which any cited individual can be heard about the facts or circumstances of his or her alleged violation.
It is time for our local courts to weigh in and it is our responsibility to place these issues before the court on behalf of both our homeless community and ourselves.
It is a time-honored maxim of law that “justice delayed is justice denied.” In my view, justice for our homeless community has been delayed much too long and we can lno onger allow it to be denied.
Steve Pleich is the director of the Homeless Persons Legal Assistance Project.