[dropcap]A[/dropcap]fter years of civil rights marches, freedom rides, and bus boycotts, the U.S. Congress voted overwhelmingly in favor of the Civil Rights Act of 1964. This landmark legislation outlawed many forms of racial discrimination against African Americans, including segregation in schools, workplaces and public accommodations.
This legislation was a major turning point in U.S. history. But how well have we learned the lessons of history? One lesson that seems forgotten is that if the civil rights of Black citizens had been put up to a vote by the citizens of Mississippi, Alabama, Georgia and other states, they would have lost overwhelmingly at the ballot box.
In the midst of the civil rights movement in the 1960s, Alabama voters elected Gov. George Wallace and Georgia voters elected Gov. Lester Maddox precisely because Wallace and Maddox were staunchly in favor of segregation “now and forever.” Both men did everything in their power to obstruct the granting of equal rights to Black citizens and both were overwhelmingly supported by the electorate for their vile acts of racial discrimination.
But Congress and the Supreme Court didn’t allow the majority of voters of those states to use the ballot box to deny fellow citizens their civil rights. Instead, Congress passed the Civil Rights Act despite the opposition of Southern governors and voters, because certain constitutional rights are too fundamentally important, too sacred, to be denied to minorities — even by a majority vote of the electorate.
This is precisely the lesson that Berkeley Mayor Tom Bates and a majority of the City Council have failed to understand and honor. In voting to place Bates’ grossly discriminatory initiative to ban sitting in Berkeley on the November ballot, the City Council has betrayed the very concept of equal rights for all.
Homeless people don’t have anywhere but public spaces to sit and rest. If the act of sitting down is criminalized, the obvious intent of the law is to drive visibly poor citizens out of downtown areas.
Punitive laws that banish certain groups of people from public spaces — whether based on appearance, economic class, gender, religion or race — are, in fact, modern-day segregation decrees, plain and simple. Berkeley’s proposed sitting ban is based on the same kind of societal prejudice against “undesirables” that gave birth to the discriminatory Jim Crow laws in the worst moments of our history.
On June 12, the City Council shamed Berkeley’s own best traditions of tolerance and respect for equal rights by voting 6-3 to place the anti-sitting measure on November’s ballot. Councilmembers Max Anderson, Kriss Worthington and Jesse Arreguin once again distinguished themselves by voting against the council’s latest attempt to pass a segregation decree that would destroy civil rights protections for poor and homeless people.
Max Anderson’s statements to Mayor Bates at the council meeting were deeply insightful, verging on prophetic. Anderson said that sitting and lying are such basic and essential human rights that they should never be allowed to be abolished, even by a majority of voters.
Anderson warned that, in the past, people have voted to eliminate the basic rights of their fellow citizens. He then made the most telling comment of all — the one sentence that should have made Bates and his council majority repent of their ill-considered plan to put human rights up for sale to the highest bidder.
Anderson said: “Voters in the South would have voted in the 1950s to extend slavery.” Anderson is completely correct in saying that. It is shameful that any elected official in Berkeley could vote for such a repressive measure after hearing Anderson’s analysis.
Last May and June, many homeless activists and organizations in Berkeley mobilized successfully to convince the City Council not to vote for Mayor Bates’ first attempt to have the council pass an anti-sitting measure. Virtually every homeless organization in Berkeley joined the Keep Sitting Legal Coalition, and after months of organizing protests and sit-ins, the council and the business lobbyists backed away from Bates’ proposal.
This latest ploy by Bates is an attempt to avoid the political price of having the council itself vote for this anti-democratic measure. By putting the anti-sitting measure on the November ballot, Bates and his allies take the measure out of their own hands and duck the firestorm of controversy the proposal provoked last spring. 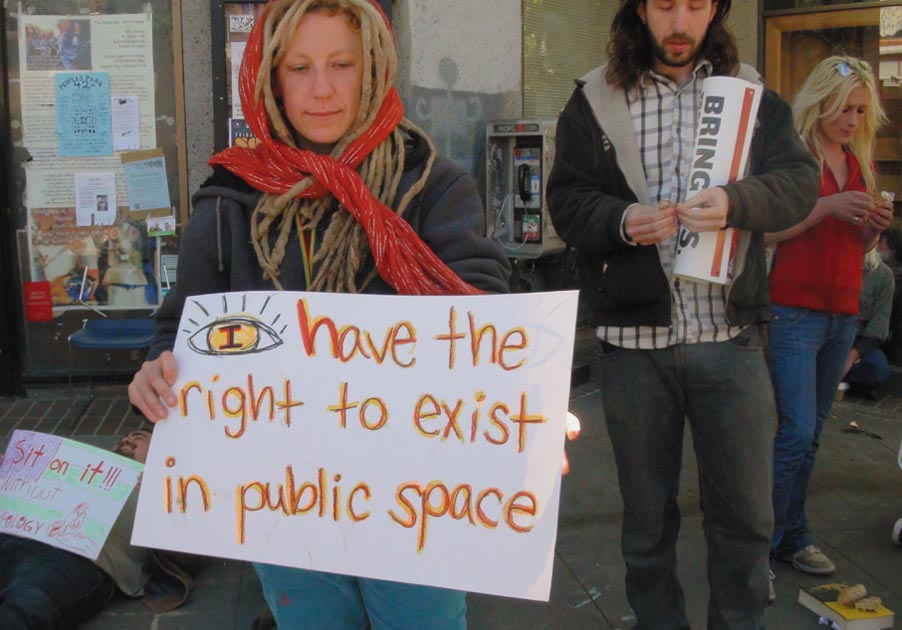 “I have the right to exist in public space.” Young people in Berkeley are protesting Mayor Bates’ attempts to banish them from the streets. Janny Castillo photo

In their shrewd calculations, they know the business community can raise hundreds of times more money than homeless people and their economically stressed allies. Also, they are counting on the fact that it is far easier for people in the privacy of the voting booth to vote on their prejudices, rather than on their principles and democratic values.
But human rights should never be abolished by a majority vote, and they shouldn’t be up for sale. The rights of the poorest of the poor shouldn’t be eliminated just because the business class can raise infinitely more money than the poor and their few allies. It is all so cynical it makes one sick at heart.
Once again, Bates has shown that human rights are for sale by doing the bidding of Telegraph Avenue business owners, the Chamber of Commerce and the Downtown Berkeley Association.
In Berkeley, as elsewhere in the nation, business interests not only control the economy; they also control the political system, because most politicians are for sale. This triumph of profit over human rights has led city after city to cave in to business interests and vote to enact segregation ordinances that should never have been countenanced by the elected officials of an alleged democracy.
The vote by the Berkeley City Council to put the anti-sitting measure on the November ballot shows us that nearly everything can be bought and sold — the rights of the poor, the city sidewalks, and the political process itself, along with our elected officials.
In his thorough coverage of the council meeting in the online Berkeley Daily Planet, reporter Ted Friedman described the following revealing exchange between this repressive measure’s chief architects.
“As Roland Peterson and Craig Becker of Telegraph property owners group left the meeting, they observed, ‘Same votes we’ve had all along.’”
One thing about businessmen — they know how to tally up their assets and calculate the value of their acquisitions. They walked out of the meeting with the majority of the council in their pocket. Now, they’re laying plans to buy the election results that will serve the interests of the business class and criminalize the impoverished class forced to live on sidewalks.
Perhaps, as they stroll to the bank, these business leaders have been forced to step one too many times over the sprawled bodies of the destitute victims of our nation’s distressed economic climate. So now they will attempt to pass laws to banish poor people from public view.
If they are successful in using the electoral process to destroy the human rights of their poorest neighbors, let them consider how the prophet Isaiah once described exactly this kind of legislation:
“Woe to the legislators of infamous laws, to those who issue tyrannical decrees, who refuse justice to the unfortunate, and cheat the poor among my people of their rights, who make widows their prey and rob the orphan.” (Isaiah 10:1-2)