[dropcap]P[/dropcap]eople of many faiths gathered in the deepening darkness of a cold December night in San Francisco, their faces illuminated by the glow of their candles and the shining lights of a lofty Christmas tree in City Hall plaza.
Those attending the Interfaith Memorial Service for Homeless People listened intently as the wintry silence was broken again and again by the bell-like tones of a gong. No need to ask for whom the bell tolls, as John Donne wrote. It tolled that evening for all of us.
The gong tolled 91 times for 91 individuals who died on the streets last year in San Francisco, and it tolled for the uncounted thousands around the nation.
Homeless memorial services were held in more than 150 cities this year on December 21, the first day of winter — a time of year when many homeless people become ill or die from exposure, hypothermia and pneumonia.
The bell sounded out all the untold stories of utter loneliness, fear and abandonment on the cold streets; stories of untreated illnesses and suicidal despair. Without words, it rang out the tales of hunger, hypothermia, heart disease, drug overdose, assault, and too many senseless deaths at tragically early ages.
With every ringing note of the gong, those attending the vigil said a silent — and final — goodbye to one more homeless brother or sister who had fallen victim to the passage of time and the unbearable hardships of the streets.
The Rev. Glenda Hope, a Presbyterian minister and director of San Francisco Network Ministries, helped organize the memorial service in partnership with the Coalition on Homelessness.
In opening the service, Rev. Hope said to those attending: “Once again, thank you for joining us to give this final dignity and this final respect to our sisters and brothers who are homeless on our streets and who are dying on our streets.”
At Rev. Hope’s insistence, the service was conducted in a quiet, prayerful manner — without rhetoric, without camera flashes, and with solemn respect. The hushed, meditative atmosphere of the candlelight vigil enabled us to more deeply contemplate the staggering loss of life.
Perhaps nowhere is the chasm between the affluent and impoverished more starkly revealed than in the multitudes of premature deaths among the homeless population. Housed Americans with health care may expect to live well into their 70s, and many live into their 80s and 90s.
Yet, this year, the National Law Center on Homelessness and Poverty in Washington, D.C., reported that homeless Americans die, on average, 30 years earlier than those with housing.
As clergy members and staff of the Tom Waddell Health Center read the names and ages of those who had died on city streets, it was startling to realize that the majority of deaths were of people in their 40s and 50s. Rev. Hope said, “I was surprised how many people were in their 20s and 30s” when they died.
The gong tolled repeatedly as the litany of names was read: “Terrence Addaly, 56, found on sidewalk. Patrick Coller, 41, undetermined death. Thomas Brewer, 50, found outside. Charles Morrison, 45, found outside. Carlos deJesus, 24, suicide by hanging. Louise Hernandez Olguin, 34, drug related death. Gustavo Ochoa, 54, found on sidewalk. John Doe number 91, age unknown.”
So many life journeys that ended in faceless deaths on nameless streets. So many who left this world without friends or family to identify their bodies.
Most of the identities of people who died while homeless came from the S.F. Medical Examiner and the Tom Waddell Health Center, but people in attendance also called out names of homeless acquaintances who had died. One man just said, “I don’t know his name” and then the bell was rung. It was a revelation that people die on the streets all the time without anyone knowing their names.
The memorial was held right next to the City of San Francisco’s beautifully decorated Christmas tree, and directly across the street from the brightly illuminated City Hall, shining with green and red Christmas lights. In the very midst of this seasonal display of lights, so many homeless people were huddled in the dark in the plaza, shivering from the winter’s cold and sleeping on the hard ground.
It was impossible not to think the unwanted thought: There is still no room at the inn during this Christmas 2012.

Rev. Glenda Hope has worked for decades to provide essential services and housing progams for poor and homeless people. In an interview, she reflected on why there are so many homeless deaths.
“What it comes down to is why are there so many homeless people,” she said. “They cut back on research on basic health and health care. I struggle myself and I’m not a poor person. It just keeps chipping away. There’s this overwhelming despair. We’re seeing a higher incident of suicide by cop. It’s horrible for the police to get set up like that.”
Homelessness has increased to such tragic — and sometimes deadly — dimensions because of our nation’s failure to build more affordable housing and the ongoing destruction of the safety net.
“Certainly our priorities as a nation are totally screwed up,” Rev. Hope said. “San Francisco can’t do anything without money. I’m really furious that there hasn’t been an effort to get more housing.”
As the director of San Francisco Network Ministries (SFNM), Rev. Hope has done her part to create more housing for very poor people. SFNM has developed a model permanent housing program for low-income families and also created transitional housing for single homeless women. SFNM also runs a chaplaincy program that helps extremely low-income people living in a residential hotel.
Rev. Hope not only helps organize the Interfaith Memorial Service every December, but S.F. Network Ministries also performs memorials for homeless people and poor people living in residential hotels. This ministry began way back in 1980 and still continues today, averaging three memorial services a week.
In the wealthiest nation on earth, homeless people continue to die on the streets, every month of every year. Because of her work with Network Ministries, Rev. Hope sees some of this pain and suffering at first hand. 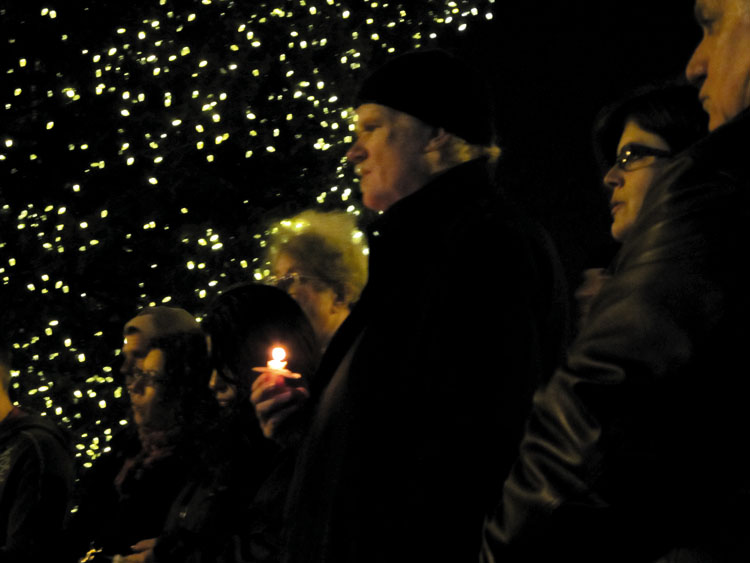 “Homeless services have been cut back,” she said. “People are hurting, they’re hurting now. We know that we have reduced the availability of drug treatment. We know that there aren’t enough affordable safe places for them to live, and then there are drug problems and mental health issues.
“There’s a lot of self-medicating. I tell you what — I’d be depressed if I was living on the streets.”

Sister Judy, a Catholic nun with the Sisters of the Presentation in San Francisco, said she has been coming to the annual memorial for the last 15 years.
“I come because I just believe in praying for all those who have died on the streets,” said Sister Judy. “I just think they’re somebody’s mother, they’re somebody’s father, brother or sister, and they deserve, as Glenda Hope said, the dignity of having someone care.”
“We are brothers and sisters. We have to be people of peace and we have to be people of compassion.”
Another memorial attendee, Josh Mann, works for Faithful Fools Street Ministries, where he helps with classes, visits people in the hospital, and works with a program which prepares middle-class people to walk through the impoverished Tenderloin.
Asked why he attended the memorial, Mann said, “I live and work in the Tenderloin. I think for me it’s a reminder that homelessness still exists, continues. A reminder to myself to continue to work for social and economic justice.”

Valerie McEntee is an assistant night minister with San Francisco Night Ministry, which operates a crisis telephone line and also sends ministers to walk the streets and serve people living outside in the night.
She said, “We go to all the different busy neighborhoods and stroll down the streets with our clerical collars on and talk to whoever wants to talk to us. People will walk up and say ‘Will you pray with me?’ and, ‘Can I talk to you?’ We’re very honored by people sharing their stories with us. It’s very sacred. It creates a little, tiny bit of sacred space right in the middle of 16th and Mission or up in the Castro.”
McEntee thoughtfully described why she attended the memorial. “Some of the people named are people we’ve known and worked with, so I want to come out to honor them,” she said. “Often this is the only memorial people get, so we are mourning our dead and the city’s dead. This is our ritual every year — to mourn our dead, as Reverend Hope said, to give them some dignity, give them some respect, something they had precious little of toward the end of their lives.”
McEntee described how the harsh conditions of homelessness can result in people dying prematurely.
“It’s hard on the body,” she said. “You can’t sleep, for one, because if you let your guard down, you can be attacked, especially for women, but for men too. And you can’t sleep because it’s cold. You can’t sleep because the ground is hard, so there’s a lot of sleep deprivation.
“Just that takes its toll on people. Then there’s a lack of access to good medical care, lack of access to good nutrition. Just one thing after another that takes its toll on the body and, on top of that, unfortunately, some people turn to substance abuse to try and cope with it. I don’t know that I wouldn’t if I were out there.
It’s a hard, hard life. It’s very stressful. And the emotional stress takes people’s systems down too. A lot of people have repeated traumatic head injury and so they have a hard time making good decisions about their own care.”
In order to prevent homeless deaths, the overwhelming need in San Francisco is more housing, McEntee said.
“We could do more wet housing, where people don’t have to be sober to get inside. And more family housing, just more shelter beds. We have a lot of empty buildings in this city that people could be living in. Just getting people inside, get them off the streets. People are outside because there’s nowhere to go.”
At the end of the memorial service, people gathered the lists of names of those who had died on the streets, and ceremoniously burned the sheets of paper.
Rev. Hope said, “Tonight and tomorrow night, services like this are being held all across our country, and we do this to give this dignity and respect to those who have died, who are our brothers and sisters. And we do it because people do not die in groups as homeless people or whatever — people die one by one, and each one has a name and a face and a life story just like each of us here.”
She then invited those with lists of names to bring them forward to be burned. Rev. Hope explained, “We do this as a way of commending our brothers and sisters into the hands of the loving, holy One and as we watch the flames, we pray that they will re-ignite our passion for the doing of justice and the work of compassion. We’ll do this in silence.”
In the sudden silence, the words of John Donne rose again to mind: “Any man’s death diminishes me because I am involved in Mankind; and therefore never send to know for whom the bell tolls; it tolls for thee.”

Ariel Messman-Rucker, designer of the Street Spirit website, conducted all the interviews and took the photos for this article.