[dropcap]I[/dropcap] have struggled against psychiatric oppression and for human rights for psychiatric survivors during the last 30 years. I’m a very proud psychiatric survivor, antipsychiatry and social justice activist; shit disturber or troublemaker are other labels given me when I once worked as a community psychologist at the notorious Queen Street Mental Health Centre in Toronto in the early 1970s.
Twenty years earlier in the United States, I was locked up for 15 months and forcibly subjected to 110 insulin shock treatments in Mclean Hospital, Harvard University’s major teaching-research psychiatric institution. I experienced insulin shock as serious trauma and psychiatric torture. I wrote an article about this horrific experience, published last year in the Journal of Critical Psychology, Psychotherapy and Counseling.
At present, electroshock, officially labeled electroconvulsive therapy or ECT, has replaced insulin shock in the psychiatric arsenal. Insulin shock, particularly insulin coma shock, caused numerous medical complications including deaths, yet it was never banned or declared illegal in North America. Electroshock is a barbaric, brain-disabling psychiatric procedure that should have been banned or abolished many years ago, soon after it was introduced as a so-called treatment for depression in the early 1940s in Canada and the United States.
I refuse to call electroshock a treatment. Why? Because this allegedly “safe, effective and lifesaving treatment” for depression and other so-called “mental disorders” always causes brain damage, permanent memory loss, terror, trauma, and sometimes death. During each shock procedure, an average of 150-200 volts of electricity are delivered to the brain though electrodes placed on one side or both sides of the brain. The current lasts for a half-second to two seconds.
There are several immediate, alarming, and health-threatening effects of each electroshock. One is convulsion, the uncontrollable shaking and thrashing around you’ve probably seen in the film, “One Flew Over the Cuckoo’s Nest.” That effect is muted since a muscle-paralyzer is administered shortly before the procedure. Another serious effect is the grand mal epileptic seizure; this lasts about one minute or longer, followed by a coma, which lasts 5-10 minutes.
You wake up in a hospital “recovery room” but you rarely fully recover. On awakening from the electrically induced coma, you also experience a splitting, migraine-type headache, disorientation (frequently not knowing your name or where you are), muscle weakness, confusion, nausea, and memory loss.
The long-term effects are permanent memory loss for past events in your life (retrograde amnesia), forgetting recently learned or new material or experiences (anterograde amnesia), and/or problems concentrating, studying or reading.
Wendy Funk and Wayne Lax are two of many courageous shock survivors in Canada who have publicly testified and spoken out against electroshock and want it banned; so do thousands of other shock survivors and critics, including myself.
Wendy is a good friend and author of the acclaimed autobiography, What Difference Does it Make? (The Journey of a Soul Survivor). She still cannot recall approximately 30 years of her life. More than 40 shock treatments were delivered against Wendy’s will, without her consent, and they erased many memories and personal events in her life since 1989. Wayne, another good friend and courageous survivor, was subjected to at least 80 shocks in Kenora over a 20-year period. Today, almost 15 years later, he still has major memory problems.
Permanent memory loss is no “side effect” — it’s a direct and devastating effect of shock. Erasing memories is an essential aspect of brainwashing, a grim fact proudly announced by the late Canadian psychiatrist D. Ewen Cameron. In the 1950s and early 1960s, Cameron conducted his torturous experiments and inflicted massive doses of electroshock and psychiatric drugs on approximately 100 patients, mostly women, during the course of his infamous brainwashing-depatterning experiments in Montreal’s Allen Memorial Institute. Cameron’s brainwashing experiments were chiefly funded by the Canadian government in the amount of approximately $300,00; the CIA contributed another $62,000.
Hundreds of Canadian citizens — approximately 75 percent were women — were permanently brain-damaged and disabled. A few brainwashing survivors have successfully sued the government and won or settled out of court. Others are still waiting 40 years later to be “compensated” for having their brains and lives ruined by electroshock and psychiatric drugs.
Electroconvulsive brainwashing (“ECB”) is a more accurate and consciousness-raising term proposed by shock survivor and critic Leonard Roy Frank, who once was subjected to both insulin shock and electroshock in California in the 1960s. Shock critic Dr. Peter Breggin, a noted psychiatrist and author, labels electroshock “electrically induced closed head injury” because it always damages the brain. Dr. Breggin urges a ban of electroshock treatments.
The emotional “high” or euphoria many survivors experience shortly after a series of shocks is routinely misinterpreted as “improvement” by shock promoters and psychiatrists. Euphoria is a common effect of head injury. Many people, even highly educated professionals, are surprised when I tell them electroshock is increasing in Ontario, in other Canadian provinces, and in many states in the United States. “You mean they’re still doing it?” they ask. 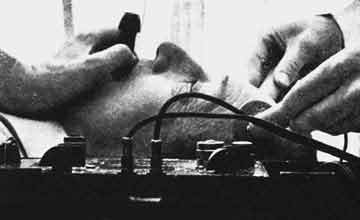 I have statistics from the Ontario government’s Ministry of Health which clearly show large numbers of shock treatments and numbers of people shocked in Ontario during the last 20 years. Women and elderly people, especially women 60 years and older, are its main targets.
For example, in 2001-2002, a total of 14,034 shocks were administered to 1,656 citizens. Over two-thirds, 68 percent, were women. Elderly women, 65 years and older, were shocked about three times more often than men. That’s why I also label electroshock a form of elder abuse.
There is no law or regulation, to my knowledge, which mandates hospitals in Ontario and other provinces to report all shock procedures and medical complications and deaths to the federal minister of health and provincial ministers of health. So far, such reporting is discretionary or voluntary. There should be a mandatory electroshock reporting law in every province in Canada, and in the United States. The public and researchers should have a right to this information and it should be easy to access.
The American Psychiatric Association and Canadian Psychiatric Association have consistently minimized, and even denied, the extent to which electroshock causes permanent memory loss and brain damage. Today, Canadian shock doctors and other psychiatrists still deny the neurological fact of brain damage from shock and try to rationalize the grand mal seizure which always occurs during every shock treatment as “therapeutic.” Therapeutic seizure?! Another psychiatric oxymoron.
Some American neurologists, such as John Friedberg, Sydney Sament and Robert Grimm, neuroscientist Peter Sterling, and psychiatrists Peter Breggin and Lee Coleman have seen through these professional deceptions, denials and lies and want shock banned. I totally agree. However, in Canada, virtually all neurologists have remained ominously and shamelessly silent about this psychiatric atrocity, which many survivors have rightly called a crime against humanity.
Former U.S. Attorney General and prominent human rights advocate Ramsey Clark once asserted, “Electroshock is violence.” He made that statement during an invited address in New York at the Annual Meeting of the American Psychiatric Association in 1983.
During the 1980s and 1990s in Toronto and Vancouver, hundreds of survivors and supporters, including myself, publicly and courageously protested against electroshock in front of notorious shock mills, particularly the Queen Street Mental Health Centre, the Clarke Institute of Psychiatry, the Royal Ottawa Hospital, and Riverview Hospital in Vancouver. In the United States, many more protests and demonstrations have been organized in San Francisco and Berkeley, New York City and Syracuse, to name a few. Unfortunately, these public protests have not led to a major decrease in electroshock, except for the odd hospital that stopped doing shock while pushing antidepressants and neuroleptic drugs — which also cause brain damage.
Death from electroshock has also occurred, but is usually minimized or covered up by hospital and government officials in Canada and the United States. Leonard Roy Frank, a good friend, shock survivor and outstanding anti-shock activist and author of the classic, A History of Shock Treatment, has compiled lists of shock deaths. So far, he’s documented over 400 deaths related to or caused by electroshock since 1942 in studies published in the English-language medical literature. No doubt many more shock deaths have occurred, but have been unreported or covered up in the United States, Canada and other countries.

1. Electroshock should be totally banned, because this procedure is inherently harmful and causes brain damage, including permanent memory loss.
2. A federal law should order the reporting of all electroshock procedures, including statistics listing the number of procedures and number of patients, broken down by province, hospital, age and gender. These reports must include the nature and incidence of all major medical effects and medical complications including death. These mandatory reports must be sent to all relevant government officials and kept in a special databank, and copies of this annual shock report must be accessible to the public while protecting the identity of patients.
3. All legislators and public health officials should become educated about electroshock by attending public hearings that feature testimony from shock survivors and an independent panel to facilitate the testimony.
Don Weitz and Carla McKague co-founded Phoenix Rising, the first antipsychiatry magazine in Canada totally controlled by psychiatric survivors. During its 10 years of publication in Toronto (1980-1990), Phoenix Rising was completely independent, courageously criticized the psychiatric system, exposed numerous abuses, and advocated for psychiatric survivors and prisoners by giving brother and sister survivors a powerful and empowering voice. Weitz is also a core member of the Coalition Against Psychiatric Assault (CAPA), which sponsored public hearings on psychiatric drugs and electroshock in April 2005 in Toronto’s City Hall. The reports and survivor testimonies will be posted this year on the CAPA website: http://capa.oise.utoronto.ca