Photos and Video by Janny Castillo

(More photos and videos at: www.boonachepresents.com)

On Friday, July 31 advocates from three states converged on the Union Square Business Improvement District as part of a national campaign to build a multi-state Homeless Bill of Rights and demand the right for all people to engage in the necessary activities of sitting, lying, eating, sharing food, and practicing religion without being criminalized. The Western Regional Advocacy Project is coordinating this fight against the criminalization of poor and homeless people’s existence in Colorado, Oregon and California. All three states are considering legislation for a Right To Rest. California’s legislation was authored by Senator Carol Liu, SB 608.
The march kicked off with a boisterous rally at Powell Street BART Station at the San Francisco tourist destination Cable Car turnaround. Weaving through the Friday afternoon commuters, shoppers and tourists over 75 protestors waved colorful placards demanding “House Keys not Handcuffs”
“We are back to the days of Jim Crow laws and Anti-Okie laws, the BIDs are promoting discriminatory policing practices to simply remove people deemed unwanted from certain parts of town” said Lisa Marie Alatorre of the San Francisco Coalition on Homelessness. “We are marching today to tell the BIDs that we are here to stay and we will have our Right to Rest.”
The marchers moved up Powell Street to the Union Square Business Improvement District office in the heart of San Francisco’s premier shopping district. Huge cardboard cutouts of jails appeared and protestors spilled off the sidewalk and into the street.
The crowd then moved into Union Square proper where speakers from around the country addressed the problem of Business Improvement Districts (BIDs) in their communities. BIDs have been relentlessly policing poor and homeless people for simply existing in public space.
“The Union Square Business Improvement District is not actually interested in creating a safer San Francisco for everyone but are solely interested in protecting the interests of wealthy San Franciscans and keeping poor and homeless people out of sight” said Coral Feigin of the Western Regional Advocacy Project.
A recent street outreach survey conducted by organizers at the Western Regional Advocacy Project shows that 79% of street-involved people who received a ticket from the police assumed that it was a result of their economic status. 74% of street-involved people have seen private security guards harassing, policing and displacing people from the public sidewalk. At the same time only 28% of people surveyed in San Francisco know a safe and legal place to sleep. The vast majority of this harassment has been relegated to locations within Business Improvement District boundaries. Enforcing laws meant to target homeless people are simply adding more stress and struggle into people who are already struggling to even survive.
The Union Square BID, which finds 96% of it’s funding from raising property taxes in the district, spends over 2 million dollars on what it calls “Clean & Safe” expenses such as policing, security cameras and other surveillance technology. The main focus of the BID’s idea of safety is relegated to the citing, harassing, incarcerating and displacing poor and homeless people through the discriminatory practices of enforced sit/lie legislation.
The United States has a long history of using discriminatory and violent laws to keep “certain” people out of public spaces and out of public consciousness. Jim Crow laws segregated the South after the Civil War and Sundown Towns forced people to leave town before the sun set. The anti-Okie law of 1930s California forbade poor Dustbowl immigrants from entering the state and Ugly Laws swept the country and criminalized people with disabilities for being seen in public. Today, such laws mostly target homeless people and are commonly called “quality of life” or “nuisance crimes.”
As the demonstration came to a close protestors called for a return to San Francisco to protest BIDs at the International Downtown Association (IDA) conference and tradeshow which will be meeting in San Francisco Sept. 30 – Oct. 2, 2015. 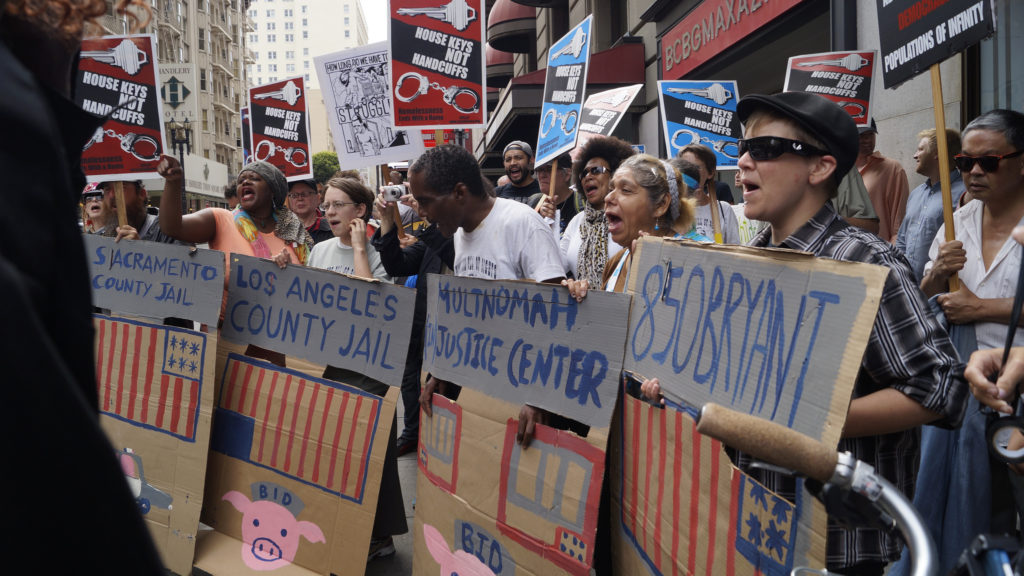