[dropcap]O[/dropcap]AKLAND (1/19/15)—More than one thousand people marched through East Oakland’s African American and Latino neighborhoods during the Martin Luther King celebration this year, making the connection between the radical politics of Dr. King and the Black Lives Matter movement in solidarity with the people of Ferguson and all those fighting for social justice. The following excerpts are taken from three speeches made by Dr. King in the last two years of his life. His call for he radical transformation of U.S. society, and the end of U.S. military intervention in other countries, is as much on the agenda today as it was when he spoke these words.

Rev. King’s historic anti-war speech, Riverside Church, New York, April 4, 1967
I knew that America would never invest the necessary funds or energies in rehabilitation of its poor so long as adventures like Vietnam continued to draw men and skills and money like some demonic, destructive suction tube.
We must rapidly begin the shift from a thing-oriented society to a person-oriented society. When machines and computers, profit motives and property rights, are considered more important than people, the giant triplets of racism, extreme materialism, and militarism are incapable of being conquered.
One day we must come to see that the whole Jericho Road must be transformed so that men and women will not be constantly beaten and robbed as they make their journey on life’s highway. True compassion is more than flinging a coin to a beggar. It comes to see than an edifice which produces beggars needs restructuring.
A true revolution of values will soon look uneasily on the glaring contrast of poverty and wealth. With righteous indignation, it will look across the seas and see individual capitalists of the West investing huge sums of money in Asia, Africa, and South America, only to take the profits out with no concern for the social betterment of the countries, and say, “This is not just.” It will look at our alliance with the landed gentry of South America and say, “This is not just.” The Western arrogance of feeling that it has everything to teach others and nothing to learn from them is not just.
A true revolution of values will lay hand on the world order and say of war, “This way of settling differences is not just.” This business of burning human beings with napalm, of filling our nation’s homes with orphans and widows, of injecting poisonous drugs of hate into the veins of peoples normally humane, of sending men home from dark and bloody battlefields physically handicapped and psychologically deranged, cannot be reconciled with wisdom, justice, and love. A nation that continues year after year to spend more money on military defense than on programs of social uplift is approaching spiritual death.
There is nothing except a tragic death wish to prevent us from reordering our priorities so that the pursuit of peace will take precedence over the pursuit of war. There is nothing to keep us from molding a recalcitrant status quo with bruised hands until we have fashioned it into a brotherhood.
These are revolutionary times. All over the globe men are revolting against old systems of exploitation and oppression, and out of the wounds of a frail world, new systems of justice and equality are being born. The shirtless and barefoot people of the land are rising up as never before. The people who sat in darkness have seen a great light. We in the West must support these revolutions.

I’ve Been to the Mountaintop

Rev. King’s last speech, Mason Temple, Church of God in Christ, Memphis, April 3, 1968
The masses of people are rising up. And wherever they are assembled today, whether they are in Johannesburg, South Africa; Nairobi, Kenya; Accra, Ghana; New York City; Atlanta, Georgia; Jackson, Mississippi; or Memphis, Tennessee, the cry is always the same: “We want to be free.”
If something isn’t done and done in a hurry to bring the colored peoples of the world out of their long years of poverty; their long years of hurt and neglect, the whole world is doomed.
We mean business now and we are determined to gain our rightful place in God’s world. And that’s all this whole thing is about. We aren’t engaged in any negative protest and in any negative arguments with anybody. We are saying that we are determined to be men. We are determined to be people. We are saying that we are God’s children. And if we are God’s children, we don’t have to live like we are forced to live.
When the slaves get together, that’s the beginning of getting out of slavery.
The issue is injustice. The issue is the refusal of Memphis to be fair and honest in its dealings with its public servants, who happen to be sanitation workers.

Remaining Awake Through a Great Revolution

Rev. King, National Cathedral, Washington, D.C., March 31, 1968
This day we are spending 500,000 dollars to kill every Vietcong soldier. Every time we kill one we spend about 500,000 dollars while we spend only 53 dollars a year for every person characterized as poverty-stricken in the so-called poverty program, which is not even a good skirmish against poverty.
Not only that, it has put us in a position of appearing to the world as an arrogant nation. And here we are ten thousand miles away from home fighting for the so-called freedom of the Vietnamese people when we have not even put our own house in order. And we force young black men and young white men to fight and kill in brutal solidarity. Yet when they come back home that can’t hardly live on the same block together.
There comes a time when one must take the position that is neither safe nor politic nor popular, but he must do it because conscience tells him it is right. I believe today that there is a need for all people of goodwill to come with a massive act of conscience and say in the words of the old Negro spiritual, “We ain’t goin’ study war no more.” This is the challenge facing modern man.
I say to you that our goal is freedom, and I believe we are going to get there because however much she strays away from it, the goal of America is freedom. Abused and scorned though we may be as a people, our destiny is tied up in the destiny of America.
Before the Pilgrim fathers landed at Plymouth, we were here. Before Jefferson etched across the pages of history the majestic words of the Declaration of Independence, we were here. Before the beautiful words of the “Star Spangled Banner” were written, we were here.
For more than two centuries our forebearers labored here without wages. They made cotton king, and they built the homes of their masters in the midst of the most humiliating and oppressive conditions. And yet out of a bottomless vitality they continued to grow and develop. If the inexpressible cruelties of slavery couldn’t stop us, the opposition that we now face will surely fail.
All photos were taken by David Bacon during the Martin Luther King marches in Oakland this year. 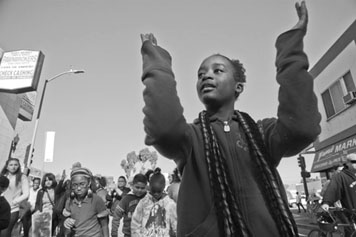 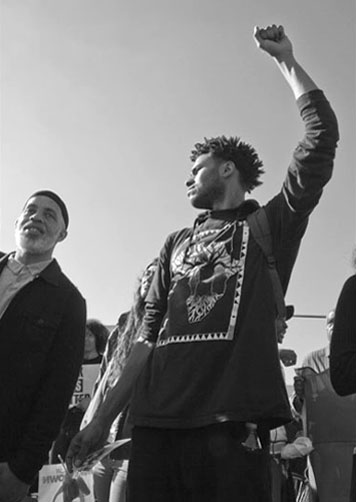 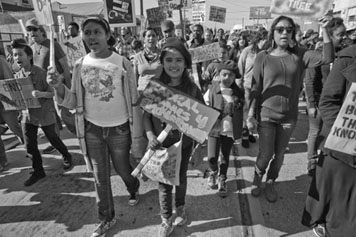 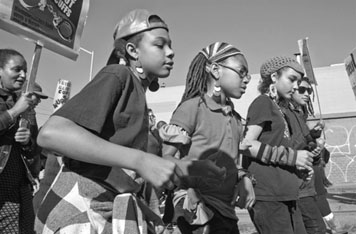