Selections from Doodling on the Titanic 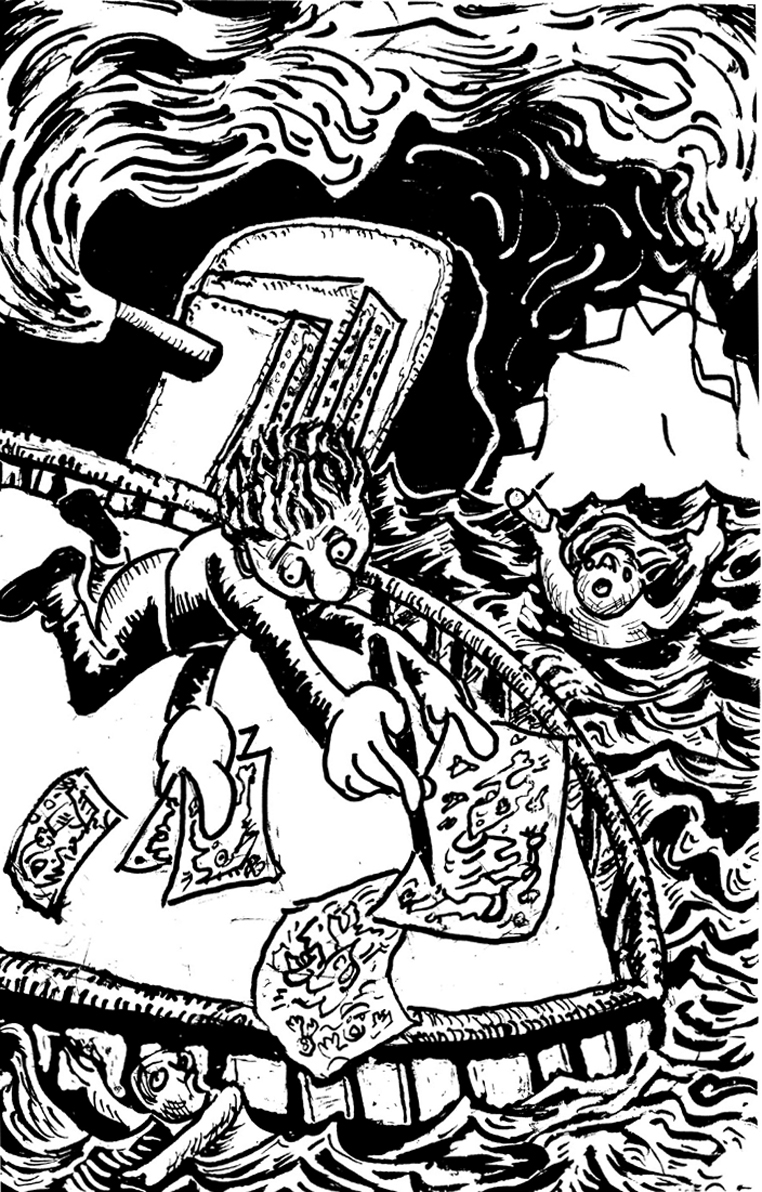 On the value of art when the going gets rough
A condemned prisoner in the hours before his execution might write a poem, and would no doubt appreciate the pen and paper with which to do it, but he would certainly prefer a file to saw through the bars or a gun to shoot his way out of jail.
On whether art takes sides when armies fight
The sound of bugles leads armies into battle, but the beauty of a song rises above the conflict, and the same melody, with the words changed, can inspire either side. The truly great works of art, no matter how fervently they were painted against their times, no matter the scandal they once provoked, eventually are accepted into the fold, and take their place, like honored elders, in the hushed galleries of the museums of the world.
On the relation of art to revolution
The revolutionary on the barricade fights to return the world to the people. She raises her fist and shouts: “You stole our lives, our health, our happiness. You stole the wealth wrung from the earth by our sweat and blood. The diamonds dug from your mines belong to us who work in their dark bowels. The wheat in your sunny fields belongs to us who planted it and reaped the harvest. You have sold the fruit of our labor and pocketed the profits. We want what’s ours. We’ve come to take the world back.” The artist also struggles to take back the world. Van Gogh struggles with the sunlight and the wheat to make it his, to appropriate it. He struggles alone, but if he succeeds, his victory belongs to all of us. His struggle is not with the bosses or the owners of the wheat field. The police will not be called when he leaves with his picture under his arm. He takes only the image, not the reality, only the hope, not its realization.
On the making of art in a world on the brink
Art has always been the hope of the hopeless, the refuge of those without shelter, the joy of the bitterly sorrowful. Without hope, there can be no art; and without art, there can be no hope. When all hope is lost, we seek solace in a song. The mother whose child is dying in her arms will, in its last moments, croon a lullaby to sooth it toward sleep. And if we, as humanity, are killing our mother, we might as well croon a lullaby to ourselves, and rock ourselves in each other’s arms, as we descend into the everlasting sleep of the human race.

******************
Doodling on the Titanic is available online from Amazon (if you can stand it) and Barnes and Nobles. It can be ordered by your local bookstore. Osha Neumann can be contacted at oshaneumann@gmail.com

Book Launch Party for Doodling on the Titanic