[dropcap]T[/dropcap]he United States is the only super-power left on the planet. Today it possesses the mightiest military in the entire recorded history of humanity. With more than 8,500 nuclear warheads, our country has the capability of not only destroying, but actually exterminating most life on the planet.
The United States now accounts for 42 percent of all military spending in the world, and it maintains more than 1000 foreign military bases in 130 countries.
The size of our military arsenal is staggering, almost beyond imagining. With 71 nuclear submarines, the U.S. Navy has seven times more than China and more than twice as many as Russia. In addition, the U.S. fleet includes 11 aircraft carriers.  No other country in the world has more than two and all of the rest of the countries together have only nine. Russia has only one and China has none.
The overkill represented by our sea-going arsenal is more than matched by our aerial forces. With 4400 bombers, fighter planes and attack aircraft, the United States has more than both China and Russia combined. Our nation also has four times as many attack helicopters as the whole rest of the world combined.
With all these weapons and such vastly superior military might, why is it that Americans still don’t feel safe?
One source of the prevalent feeling of insecurity is the growing economic inequality that has dangerously eroded the standard of living for millions of people. Growing poverty, poor health care and massive homelessness have created a form of “national insecurity” that cannot be alleviated with military spending on the “national security state.”
The 400 richest families in the United States have more wealth than the bottom 150 million combined. As a result, the United States has the fifth most unequal distribution of wealth in the entire world.
As of 2007, the bottom 80 percent of the U.S. population held only 7 percent of all the wealth.  The top 1 percent had 42 percent, and the top 10 percent held a whopping 80 percent of all the wealth.

Even though the United States spends more on health care than any other industrialized country in the world, 50 million Americans lack basic health care. Infant mortality rates here are higher than in Japan, Germany, England or Sweden. And 36 other countries have longer life expectancy then in America.
Poverty rates have risen to unprecedented levels. The number of Americans living below the official poverty line — 46.2 million people — was the highest in the 52 years that the Census bureau has been reporting on it. The 15.1 percent of Americans living below the poverty line last year was the highest level since 1993. Shockingly, more than one in five children live in poverty.
An estimated 1.56 million people, roughly 1 in every 200 people in America, used an emergency shelter or a transitional housing program during the 12-month period between Oct. 1, 2008, and Sept. 30, 2009. Between 2009 and 2010, evictions increased by 127 percent.
The foreclosure crisis has touched nearly every community, and made homelessness and the lack of affordable housing a nationwide problem. From the start of the recession in 2008 until March of this year, 3.3 million homes went into foreclosure. As of January 2012, one in every 14 homes were more than 90 days delinquent in their mortgage payments.
The gap between the rich and the poor has grown to historic levels. In 1980, the average CEO was paid 40 times what the average worker earned. By 2010, average CEO pay was almost 350 times that of the average worker.
Since 1979, the average income of the top 1 percent increased by $700,000, while the average income for the bottom 90 percent actually decreased by $900. The top 1 percent now receives 24 percent of the nation’s income. In 2010, the richest 1 percent grabbed 93 percent of all of the income gain in the United States.
While those at the top enjoyed sharply rising incomes, the average family saw its income drop by more than $3700 in the decade of wars and recession, 2000-2011.
Although crime in America in general has decreased over the last 20 years, the country’s incarceration rate is the highest in the world — higher than Russia and China combined. At the end of 2010, 2.3 million adults were incarcerated in America. In total, 7.2 million adults were under correctional supervision (probation, parole, jail, or prison) in 2009. The U.S. has one-quarter of all the prisoners on the planet, more than 35 European nations combined. Since 1995, the federal prison population has more than doubled.
In the last three years, 30 of America’s largest corporations, like GE and Exxon, paid no taxes at all and, together, these 30 major corporations received over $10 billion in tax refunds. Oil companies alone scored $4 billion in tax breaks while at the same time earning record profits, and 1470 households earning more than $1 million a year paid not a single penny in taxes. On average, Bush-era tax cuts for the top 1 percent are worth more than what the average family makes all year. 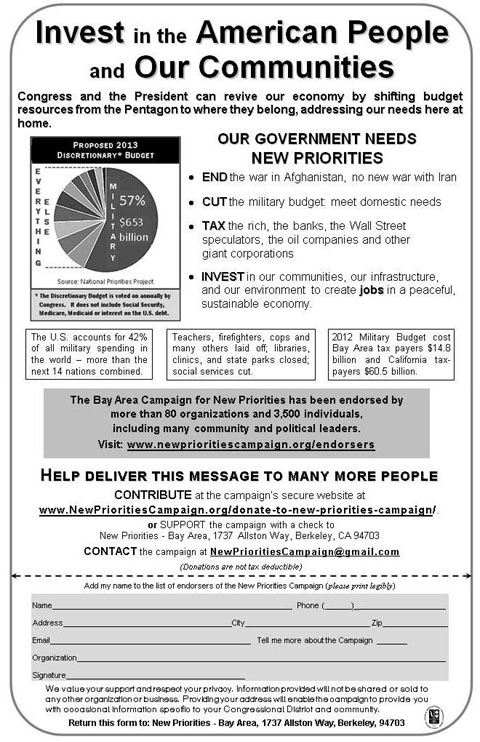 Is it any wonder that so many people are outraged? And as bad as that is, it is not the whole story.
The fact is that real security is not provided by buying more guns. The most powerful military on the planet could not prevent the destruction on 9/11. Our country has been turned into “fortress America” to protect the interests of the 1% at the expense of the 99%. National security needs to be defined by more than our missiles, ships, planes and drones.
The real threat to our security is measured by how many are unemployed or working part time while needing full-time work; how many lack healthcare; how many are homeless or at risk of losing their homes; how many schools are failing our children; how many youth drop out and can’t find jobs that pay enough to raise a family; how many kids go to bed hungry; how many vets return with traumatic brain injuries and post-traumatic stress disorder, but can’t get treatment; how many workers are fired for simply trying to join a union; how many clinics, elder care and day care centers close because local governments can no longer afford to keep them open.
We’re now spending at the rate of $5,371.54 per second to prosecute the Iraq and Afghan wars. What we will spend this year on the war in Afghanistan alone is equal to cover all of the state budget deficits combined. Total national security expenditures since 9/11 come to $7.6 trillion, of which $1.36 trillion is the cost of the two wars, $230.3 billion for nuclear arms, $5.6 trillion for the Pentagon’s core budget and $472.1 billion for Homeland Security.
We could cut our military budget in half and we’d still spend more than any other country in the world!
Our nation’s priorities are out of whack. It’s time to demand new priorities — ones that put the welfare of the American people ahead of the welfare of Lockheed Martin, Boeing, General Electric, General Dynamics, Bechtel and KBR.
That’s why antiwar activists, social and economic justice organizations, labor unions, faith groups and other organizations have come together to form the Bay Area Campaign for New Priorities (NPC).
NPC began by defining four core principles that all these different groups share: (1) ending the wars, bringing the troops home, and preventing any new wars; (2) moving resources from the military to restore the social safety net and meet social needs; (3) tax reform that forces the 1% and giant corporations to pay their share; and (4) investing in our communities by repairing infrastructure, replacing old schools, providing universal health care, providing affordable housing, creating jobs and protecting the environment.
The Campaign for New Priorities has brought resolutions calling for these changes to city councils and asked them to adopt them and call on members of Congress to do the same.  NPC is building support for the Budget for All sponsored by the Congressional Progressive Caucus.
NPC helped to form a national network of organizations with the same “move the money” objectives. The Campaign is now raising funds to put ads like the one here in Street Spirit in other publications and internet media to mobilize the public and put pressure on the politicians.
We agree with Frederick Douglass when he said, “If there is no struggle, there is no progress. Those who profess to favor freedom, and yet depreciate agitation, are men who want crops without plowing up the ground. They want rain without thunder and lightning. They want the ocean without the awful roar of its many waters. This struggle may be a moral one; or it may be a physical one; or it may be both moral and physical; but it must be a struggle. Power concedes nothing without a demand. It never did and it never will.”
Join the Campaign for New Priorities to build a movement that can effectively demand a demilitarized foreign policy that invests in more diplomacy, not more weapons; an economy that supports everyone, not just the rich; and a society that cares for everyone, not just those with money, power and political connections.
Visit the NPC website at www.newprioritiescampaign.org or write to NPC at newprioritiescampaign@gmail.com. Donations to support this work may be sent to New Priorities-Bay Area, 1737 Allston Way, Berkeley, CA 94703.
[hr]
Michael Eisenscher is the National Coordinator of U.S. Labor Against the War (USLAW) and co-founder of the Campaign for New Priorities and New Priorities Network.