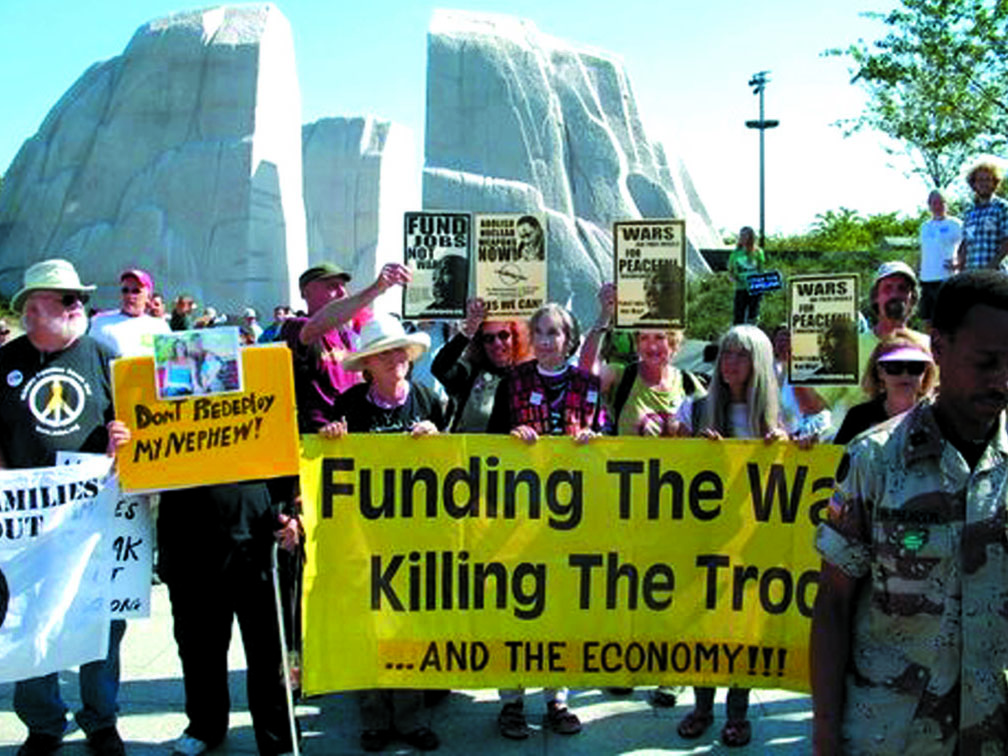 [dropcap]T[/dropcap]he Occupation in Freedom Plaza in Washington, D.C., only two blocks from the White House, and the occupations around the country and the world have given me more hope than anything I have experienced since the civil rights and anti-war movements in the 1960s.
Hundreds of thousands of people from all walks of life and all ages, races and religious backgrounds — especially young people — are waking up and saying, “We aren’t going to take it any more. We will not put up with a society where the government does not represent the people, but too often represents the corporations and the wealthy.”
The occupiers have proclaimed to the whole world that they will no longer put up with a government which spends hundreds of billions of dollars to fight foreign wars, create more nuclear weapons and build military bases around the world, while making drastic cuts to education, health care and the welfare of the people.
People in this movement are willing to put their bodies on the line and commit themselves for the long haul to make sure their voices are heard. The demonstrators have found that there are many others out there who share the same strong hope that we can make systemic change in our society, by acting together.
We are not alone. We are the 99%, and with courage and a commitment to nonviolence, we shall overcome.
I believe the majority of the American people support the agenda this movement is promoting, including the following goals.
* Tax the rich and corporations.
* End the war, bring the troops home, and cut military spending.
* Protect the safety net, strengthen Social Security and provide housing and health care for all.
* End corporate welfare for oil companies and other big business interests.
* Transition to a clean-energy economy, and reverse environmental degradation.
* Protect workers rights and collective bargaining, create jobs and raise wages.
* Get money out of politics.
What made this gathering in Washington, D.C., different from many demonstrations in the past was that this was not just a single protest lasting one afternoon, and then everyone goes home. Instead, people came prepared to stay until their voices were heard. They were committed to stopping the madness of the wars in Afghanistan and Iraq and bringing the hundreds of billions of dollars home to meet needs here in the United States.
Indeed, according to a recent poll by Time magazine, if Occupy Wall Street were a candidate for president, it would defeat every other candidate on the stage, including Barack Obama and Mitt Romney. Fifty-four percent of Americans agree with the protesters, versus 44 percent who think Obama is doing a good job.

Other numbers are even more revealing. Seventy-three percent of Americans want prosecutions of Wall Street executives for the financial crisis they have caused. Seventy-nine percent think the gap between rich and poor is too large.
Eighty-six percent say Wall Street and its lobbyists have too much power in Washington. Sixty-eight percent think the rich should pay more in taxes.
The courageous people of Egypt who occupied Freedom Square in Cairo and forced their dictator to resign because he was not listening to the Egyptian people were our inspiration. So we came to Freedom Plaza to say with our bodies: Our government is not listening to us. We want to return to a democracy of, by and for the people — not of, by and for the corporations and the wealthy.
My wife, Jan Hartsough, and I went to Washington, D.C., in early October for the first ten days of the occupation of Freedom Plaza. We were inspired that thousands of people from all over the country had come to help make history, save our democracy and stop the horrendous wars which are not only killing thousands of people in Afghanistan and Iraq, but in the words of Martin Luther King, are “destroying the Soul of America.”
This campaign was organized by Veterans for Peace, Vietnam Veterans Against the War, young people of many races, homeless people and peace and justice activists from around the country.
Freedom Square blossomed with wave after wave of creative signs and colorful banners. The signs spelled out the passionate dissent of hundreds of thousands of protesters, transforming Freedom Square into a huge alternative newspaper written by and for the people.
Here’s a sampling of the signs: “We are the 99%.” “Tax the Greedy, Help the Needy.” “There is enough for everyone’s needs, but not for everyone’s greed.”
Other signs declared: “Support the Troops, End the Wars.” “Affordable Housing is a human right.”  “The military budget is killing us. Bring our Billions Home.” “W.A.R. — Wasted American Resources.” “I will believe corporations are people when Georgia executes one!”  “Guided missiles, misguided men.” “Windmills not oil spills.” “Separation of Corporations and State.”
Here is a taste of some of the people I met at Freedom Plaza. A young, African American man in his late 20s told me, “This is the most exciting moment of my life. I’ve been waiting my whole life for this. I would have never dreamed it would be possible. Our government represents the rich and the corporations. We need a nonviolent revolution to take back this country for the people. We need a government of, by and for the people, not just the rich and the corporations.”
The young man expressed enthusiasm not only for the massive size of the demonstration, but for the spirit of community in Freedom Square. He said, “I have found a community of people here who care and are ready to commit our lives to changing our society to one where there is justice and we are at peace with the world. I am ready to stay here the rest of my life if necessary. We shall overcome!”
A military veteran told me, “What we are producing in Iraq and Afghanistan, in addition to thousands of civilian deaths, are walking time bombs in our country, as post-traumatic stress damages loved ones and communities.” 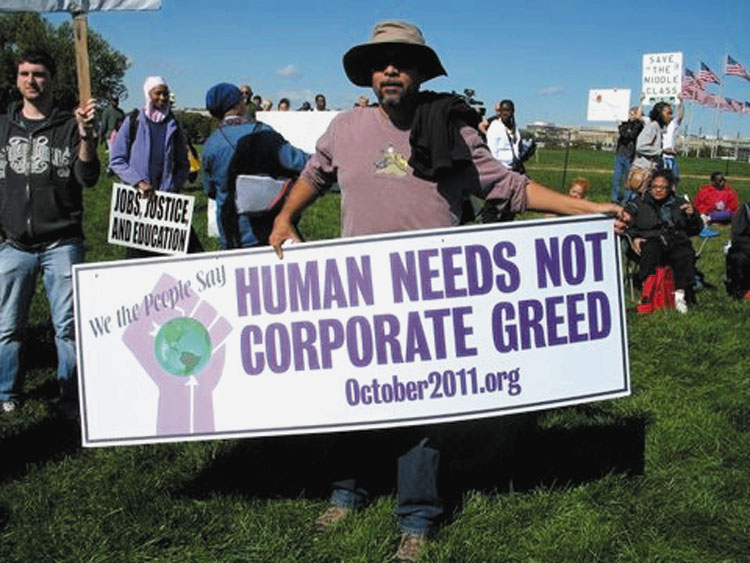 Washington. D.C., came alive with colorful signs that spelled out the dissent of thousands of protesters, transforming Freedom Square into a huge alternative newspaper written by and for the people.


A young man on active duty said, “The wars are based on lies, and our occupations are exposing the military and Wall Street.” A woman from Washington state said, “I’m fed up with the direction this country is taking. I’m here to rally for future generations.

Marching on the military-industrial-Wall Street complex

We walked each day to a different manifestation of the military-industrial-Wall Street complex in Washington, D.C., to speak truth to power, and share our determination to change things.
We marched to the offices of General Atomics which produces drones and demanded an end to these long-distance death machines. We were chased out of the building. We marched to the Air and Space Museum to protest their exhibition of drones, and were tear-gassed. The museum was closed for the rest of the day.
We marched to the Chamber of Commerce building, with masses of people shouting, “We want jobs!”
We demonstrated in front of the Convention Center which was having a weaponry fair where corporations were showing off and selling tanks, armored personnel carriers and every conceivable type of military equipment to the U.S. Army. We called for an end to war profiteering and an end to the senseless wars.
We filled the atrium of the Hart Senate Office Building and hung banners from the balconies of all seven floors and chanted:  “Stop the Wars! Tax the Rich!” Senate aides later told us they had heard our message.
We occupied the National Security Agency and 12 of us were arrested.
We marched to the White House where Iraq and Afghanistan veterans and military families asked for a “beer summit” with the president to share their personal experiences in the wars and the urgent need to end the wars and military occupations now.

Most days, some of us would be arrested at these protests. On Sunday evening, October 9, hundreds prepared to be arrested rather than be evicted from Freedom Plaza. The next morning, the Park Service offered to extend our permit for four months so we could continue our occupation, and keep the tents set up to offer food, legal support and medical care.
Each night, we held a General Assembly where major decisions were made by consensus of the hundreds of people present.
We also had visits and heard inspirational talks by people like Ralph Nader, Dick Gregory and Patch Adams. Dick Gregory said, “We need to be like a turtle — hard on the outside, soft on the inside and willing to stick our neck out… We have already won. We have given people hope.”
Dennis Trainer, Jr., said, “American democracy is broken. We are here to fix it. We are here and we are in revolt. We are the 99% and we can and must do this without violence.”
Ralph Nader called for liberty and justice for all, not just the few. He suggested that we surround the Congressional offices all over this country, or occupy them, “until they agree to represent the people, not corporate interests.”
Patch Adams reminded us that our revolution needs to be a “revolution of love” — love for one another and for everything on the planet. “The revolution can be fun.”
The Occupy Wall Street movement is a beacon of hope for not only the 99% of American people who want a return to democracy, but for all the people of the world who have suffered so much from the U.S. government acting as though the world is our empire.
If we can keep our movement nonviolent, even in the face of provocation and violence by the police or infiltrators, there is no stopping this movement short of victory. We shall overcome!
[hr]
David Hartsough is a co-founder of the Nonviolent Peaceforce and Director of PEACEWORKERS, and a member of San Francisco Friends Meeting.
For more information on the Occupation at Freedom Plaza, see www.october2011.org and www.occupytogether.org