[dropcap]M[/dropcap]ia Esquivel is one of countless disabled people in California who just suffered a significant setback when her SSI (Supplemental Security Income) was reduced to $830 per month, beginning on July 1.

These cutbacks are a terrible blow to poor people already living on the thin margin of survival. Every state official responsible for shredding this lifeline should be forced to live with a poor family for six months to see how badly these cuts jeopardize their very ability to survive.
Although these government-ordered cutbacks may take food out of the mouths of the hungry, and take medicine away from sick children, they have not eradicated the kindness and generosity that is one of the most remarkable character traits of people living in poverty.
When my wife, Ellen Danchik, first met Mia Esquivel 10 years ago, Mia was a disabled mother of two young sons and was living homeless on the streets of Antioch, Calif. She asked Ellen, at that time the housing coordinator for eastern Contra Costa County, to help her find housing.
Mia not only was homeless but also had been diagnosed with a psychological disability. Her sons were living with their grandparents. Ellen was able to hook Mia up with an innovative case management program, and then found her a Section 8 subsidized apartment in Antioch.
After finding stable housing, Mia was able to reunite with her kids and have them move into her apartment. She said that the experience of being helped touched something so deeply within her that her life was changed.
Ever since that day, she has repeatedly gone far, far out of her way to help others in need. Because she was helped during one of her darkest hours, she now tries to pass that help along to others.
Recently, Mia discovered a 37-year-old homeless woman named Elizabeth living in her neighborhood with her boyfriend, Daniel. Elizabeth is disabled and ill, and Daniel also suffers from a serious, life-threatening illness. The couple’s problems seem so complex and difficult that most people would shy away. But they live in Mia’s neighborhood and she could not pass by without helping.
Mia lives on her scant SSI benefits – the benefits that were just cut on July 1 – yet she gives money to the couple regularly. She says she can’t just give them a couple dollars because they would still go hungry, so instead she gives them $20 to $30 so they can get a good meal.
Nearly every Saturday, Mia brings the couple a clean set of clothes she buys for them at a thrift store. She buys them medical supplies. Several times, she brought new blankets to the couple because their blankets have been stolen frequently.
Mia recently consulted with Ellen so she could learn how to help the couple get benefits. Mia worries deeply about this couple, and prays they will be all right.
Mia, a single mother living in poverty, is a true neighbor who does more for this couple than entire nonprofit agencies have done. She has so little herself, but is still somehow willing to share with others.

Striking Generosity of The Poor and Homeless

Mia’s story is not unique. One of the most striking and unexpected qualities noticed by many activists and social workers who work closely with homeless people is the often amazing levels of sharing and altruism they display towards others in need. 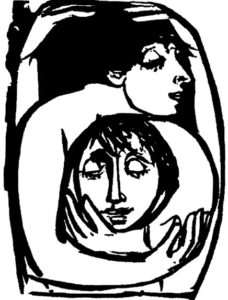 It flies in the face of the values hammered into us day and night by our materialistic society. In a nation where wealth is worshipped, and poverty is feared and deplored, society warns us to look after our own self-interest. Big corporations place profits before people, and each individual is taught to be similarly self-centered.
We are trained to idolize wealth, pursue prosperity and put our money in a bank or the stock market, not in the outstretched hands of a person in need. Yet, even in the face of this powerful societal directive to look out after number one, many people still choose to help one another.
When I became involved in organizing with homeless people in Oakland in the 1990s, that was the single most overwhelming lesson I learned. The Oakland Union of the Homeless had a wild and rebellious run of militant housing takeovers and dozens of acts of nonviolent civil disobedience. We took over abandoned office buildings, barricaded ourselves inside, and were arrested while camped out on the rooftops of federal buildings, demanding affordable housing for all.
Those were inspiring actions, but nothing else felt nearly as important as the sense of community and friendship I unexpectedly found in the Homeless Union. Their personal acts of caring and giving came to seem more important to me than all our political actions put together.
I’d never experienced that much human decency anywhere else in my life. For while we were organizing for abstractions such as “economic justice” and “housing for all,” I saw a level of mutual support and sharing that could have transformed our profit-worshipping society more profoundly than any of our housing actions.
The members of the Homeless Union constantly helped one another. They would house a friend who had just been evicted, willingly sharing their cramped little hotel room for weeks. Without being asked, they would share their last dollar with a friend who was broke. They insisted that we buy large amounts of food and cook nutritious meals for hundreds of homeless people every time we did a political action, so whether the protest accomplished anything or not, at least hungry people would be fed that day.
I have never forgotten that I learned the best, most humane lessons of my life from homeless people on the streets of East and West Oakland.

Studies Show Altruism of the Poor

I’m not the only one who learned that same lesson. “The poor are more generous than the rich when it comes to giving to good causes,” is a typical headline from the Guardian newspaper in England, reporting on a study of donors to British charities that “finds that the least well-off give a higher proportion of their income to charity than the wealthy, no matter what their age, class or beliefs.”
In a series of experiments in 2010, researchers at UC Berkeley found that “people of lower socioeconomic status are actually more altruistic than those higher on the economic ladder.” The finding of a team of UC researchers echoed recent national surveys showing that “lower-income people donate a greater percentage of their income to charity than upper-income people do.”
The UC study was conducted in 2010 by a team led by UC doctoral psychology student Paul Piff and was reported in the Journal of Personality and Social Psychology. Piff reported, “Individuals from lower-class backgrounds are more generous, trusting and helpful toward others. We find that increased altruism among lower-class individuals is caused by their heightened feelings of compassion and concern for the welfare of others.”
Yet if a sense of compassion leads poor people to exhibit greater generosity, Piff found that “wealth seems to buffer people from attending to the needs of others.”
All of which leads to a meaningful lesson in trans-species compassion, wherein two different species teach us something about overcoming homelessness.

The Kindness of the Cat Lady

Mia Esquivel called Ellen one day several years ago, and told her that she had just met an elderly homeless woman at a free meal program in Antioch. Mia was highly upset because the woman, Dorothy Hill, was in her late 70s and yet was forced to live on the street.

Mia arranged to have Ellen meet Dorothy Hill at the meal program. Ellen helped her apply at a housing program for low-income seniors in Pittsburg. Dorothy was accepted and found a new home there.
In helping her, Ellen learned why Dorothy had become homeless in the first place. In the middle of the night, a fire had ignited in the apartment building where Dorothy resided at the time. She had been sleeping soundly, but when the fire started, her cats kept meowing repeatedly and loudly until Dorothy was awakened. Her cats alerted her in time and they all managed to flee the building.
After the narrow escape, she credited her cats with saving her life. Dorothy and both cats were now homeless as a result of the fire. She was so concerned for the cats that had saved her life that she began spending her meager income on a kennel to house her cats, even while she herself remained homeless and destitute.

Will the circle be unbroken

Her cats had saved her life, and Dorothy returned their kindness by paying for a home for her cats at a time when she could not afford a home for herself.
Mia, in turn, was so inspired by Dorothy’s acts of kindness to her cats that it made her want to help her find a home, so she brought the elderly woman to Ellen in order to help her find housing.
That is how compassion is sometimes passed from one person to another, like a baton in an Olympics relay race. Mia was inspired to demonstrate the same kindness that she saw Dorothy show.
One way to describe the law of karma is: “What goes around, comes around.” Love begets love in a self-renewing circle – an unbroken circle of kindness.
One of the musical geniuses of our era, Brian Wilson, brought this truth vividly to life in his song, “This Whole World.”
“Late at night I think about the love
of this whole world,
Lots of different people everywhere,
And when I go anywhere
I see love, I see love, I see love.”
[hr]
“Glimpses of the Spirit” is a series of columns exploring the connections between social justice and spirituality. These columns search for glimpses of the spirit that inspire people to seek compassion and justice for all those who suffer from poverty and oppression.