[dropcap] L[/dropcap]ike every other president since the 1940s, Barack Obama has promoted nuclear power. Now, with reactors melting down in Japan, the official stance is more disconnected from reality than ever.
Political elites are still clinging to the oxymoron of “safe nuclear power.” It’s up to us — people around the world — to peacefully and insistently shut those plants down.
There is no more techno-advanced country in the world than Japan. Nuclear power is not safe there, and it is not safe anywhere.
As the New York Times reported, “most of the nuclear plants in the United States share some or all of the risk factors that played a role at Fukushima Daiichi: locations on tsunami-prone coastlines or near earthquake faults, aging plants and backup electrical systems that rely on diesel generators and batteries that could fail in extreme circumstances.”
Nuclear power — from uranium mining to fuel fabrication to reactor operations to nuclear waste that will remain deadly for hundreds of thousands of years — is a moral crime against future generations.
But syrupy rhetoric has always marinated the nuclear age. From the outset — even as radioactive ashes were still hot in Hiroshima and Nagasaki — top officials in Washington touted atomic energy as redemptive. The split atom, we were to believe, could be an elevating marvel.
President Dwight Eisenhower pledged “to help solve the fearful atomic dilemma” by showing that “the miraculous inventiveness of man shall not be dedicated to his death, but consecrated to his life.”
Even after the Three Mile Island accident in 1979 and the Chernobyl disaster in 1986 — and now this catastrophe in Japan — the corporate theologians of nuclear faith have continued to bless their own divine projects.
Thirty years ago, when I coordinated the National Citizens Hearings for Radiation Victims on the edge of Capitol Hill, we heard grim testimony from nuclear scientists, workers, downwinders and many others whose lives had been forever ravaged by the split atom. Routine in the process was tag-team deception from government agencies and nuclear-invested companies.
By 1980, generations had already suffered a vast array of terrible consequences — including cancer, leukemia and genetic injuries — from a nuclear fuel cycle shared by the “peaceful” and military atom. Today, we know a lot more about the abrupt and slow-moving horrors of the nuclear industry. And we keep learning, by the minute, as nuclear catastrophe goes exponential in Japan. But government leaders don’t seem to be learning much of anything.
Recently, even while nuclear-power reactors were melting down, the White House issued this statement: “The president believes that meeting our energy needs means relying on a diverse set of energy sources that includes renewables like wind and solar, natural gas, clean coal and nuclear power. Information is still coming in about the events unfolding in Japan, but the administration is committed to learning from them and ensuring that nuclear energy is produced safely and responsibly here in the U.S.” 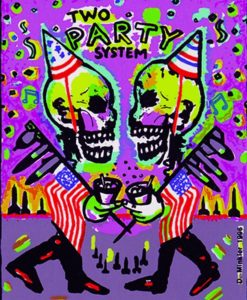 Yet another reflexive nuclear salute.

When this year’s State of the Union address proclaimed a goal of “clean energy sources” for 80 percent of U.S. electricity by 2035, Obama added: “Some folks want wind and solar. Others want nuclear, clean coal and natural gas. To meet this goal, we will need them all — and I urge Democrats and Republicans to work together to make it happen.”
Bipartisan for nuclear power? You betcha. On Sunday morning TV shows, Republican Sen. Mitch McConnell voiced support for nuclear power, while Democratic Sen. Chuck Schumer offered this convoluted ode to atomic flackery: “We are going to have to see what happens here — obviously still things are happening — but the bottom line is we do have to free ourselves of dependence from foreign oil in the other half of the globe. Libya showed that. Prices are up, our economy is being hurt by it, or could be hurt by it. So I’m still willing to look at nuclear. As I’ve always said, it has to be done safely and carefully.”
Such behavior might just seem absurd or pathetic — if the consequences weren’t so grave. Nuclear power madness is so entrenched that mainline pundits and top elected officials rarely murmur dissent.
In early 2010, President Obama announced federal loan guarantees totaling more than $8 billion to revive the construction of nuclear power plants in this country, where 110 nuclear-power reactors are already in operation.
“Investing in nuclear energy remains a necessary step,” he said. “What I hope is that, with this announcement, we’re underscoring both our seriousness in meeting the energy challenge and our willingness to look at this challenge, not as a partisan issue, but as a matter that’s far more important than politics because the choices we make will affect not just the next generation but many generations to come.”
Promising to push for bigger loan guarantees to build more nuclear power plants, Obama said: “This is only the beginning.”

Norman Solomon and Harvey Wasserman are co-authors of Killing Our Own: The Disaster of America’s Experience with Atomic Radiation.