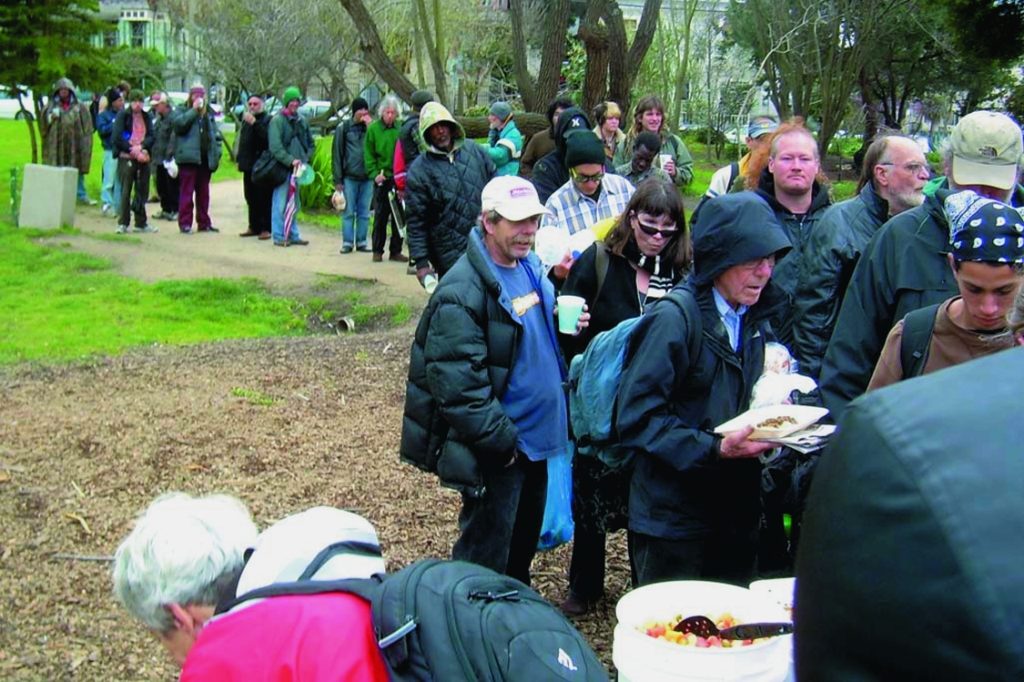 Thoughts While Standing in the Meal Line at Glide Memorial

[dropcap]I[/dropcap]n the morning, I head down to Glide Memorial Church’s soup kitchen in San Francisco. I kept just enough money, or maybe not quite enough, to get me through until next Tuesday or Wednesday, when my S.F. Unified School District substitute aide check arrives.
I made a little side money, but most of it goes to my landlady. I’ve been working for almost two weeks, from 9:20 a.m. to 3:20 p.m., in an alternative school in the Sunset District of San Francisco.
I get my breakfast at Glide around 8 a.m., then head out on the N-Judah streetcar, which I’ve also taken downtown from where I live. I’m better off than a lot of people, but making ends meet is tough, and the rope is a little frayed.
This particular teaching job hasn’t been so great, but I have the option, as a substitute, of canceling it online in the computer room at a college where I used to work, but was replaced as an adjunct English teacher. I can take another substitute job, which is usually available.
But right now, I stand in the food line with everybody else.
Several issues need to be addressed after my morning at Glide’s soup kitchen. How do we, as a caring society, assuming we are, provide services for the mentally disabled? Another obvious one: How is this country that routinely throws away tons of food daily going to shift the remains to those who have no food? And how can we help people overcome their various addictions?
I am personally into my 27th year of recovery from alcohol. It has been a struggle. I began the time of my sobriety by drinking lots of Coca Cola, more than my usual lifetime habit, to replace beer. I’ve mixed in juice, particularly cranberry juice, since that has a cleansing effect on the body. I’ve tried to eat more vegetables, but sometimes, energy-wise, only a hamburger will do. I’m an asthmatic, and that takes away energy, so I go to bed earlier and have taken allergy medications. I had pneumonia almost six years ago, and I don’t want it again.
But back to the questions at hand. The mentally ill obviously need all the help they can get. A man standing in front of me in the food line who mostly yells nonsensical things, received this comment from someone behind me: “He needs to take his medications.” Drugs may provide some of the answer, but therapy, individual and group, is also called for, I would think.
How do we feed the poor adequately? San Francisco probably has more soup kitchens than anywhere in the world to feed those in need. It’s interesting how I’ve heard people in the food line compare Glide to, say, St. Anthony, and what sort of food each serves. It seems that variety of food is one of the most important issues in providing meals for the poor.
Helping people who have somehow become disconnected from reality is key. It is essential to help those who have become estranged, perhaps, due to the harsh nature of society. Glide currently provides a number of programs, including mental health services.
I’m trying to keep going by substituting in the S.F. School District, and I’m striving to get a better deal for myself, and even teach college English again. The Glide soup kitchen provides a valuable contribution to my survival until that happens.

[dropcap]T[/dropcap]he food line at Glide Memorial was around the block almost all the way up to O’Farrell, as we waited out in the coldest weather I’ve experienced from over three decades of experience of living in San Francisco.
It isn’t quite shivering weather, yet a bit uncomfortable as I wait in the “short” line first with the other seniors, gobble my grits and diced ham, slurp down some coffee, then go back out in the cool, cool weather and line up for seconds.
I get a little upset because a man jumps in front of me in line, until I remember he asked to be there again following going in and leaving a couple of bags with his belongings in the lobby. I think my anxiety about this was fueled by a guy who I think did jump in line illegally a couple of people ahead of me.
“Give him a bag lunch!” I grumbled, then decided it was not worth a confrontation. Maybe he really was in line before.
Breakfast is always good at Glide, as are all the free meals. I usually go twice so I won’t be hungry in between meals. This afternoon is probably chili-cheese hotdogs, which they do well.
Tomorrow, unless people get paid SSI checks, and maybe regular Social Security, records could be set, as baked chicken, which Gilde does best of any meal, will have the line wrapped around the corner to O’Farrell Street for sure.
The tough times continue.