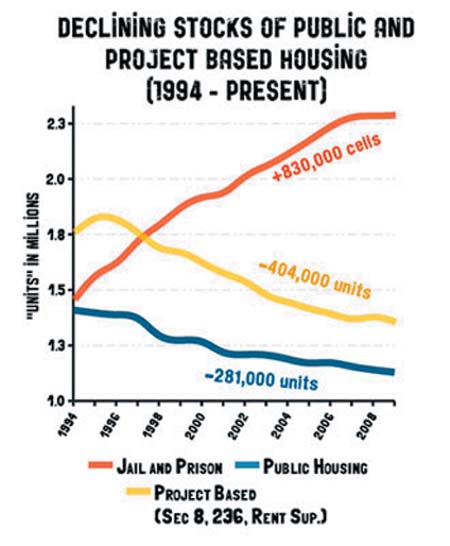 [dropcap]O[/dropcap]One more stark reminder of the disconnect between our ideals and public policy is to look at the declining stocks of our country’s public and project-based housing.
In the years between 1994 and 2008, we have been building more and more jail cells but fewer and fewer affordable housing units. As a result, we now have millions of people without housing, some living on the street, some in cars, some in jails. [See the chart accompanying this article: “Declining Stocks of Public and Project Based Housing.]
Other consequences of this disconnect are stark too. In city after city nationwide, we see new “Quality of Life” ordinances and anti-panhandling statutes. In Las Vegas, for example, both panhandlers and the people who give them money can be fined. And providing free meals for homeless people in parks is banned.
In San Francisco, a hotly debated new measure would make it illegal for people to sit down on city sidewalks. As a result, one McDonald’s on a street that has a relatively high concentration of homeless people, Haight Street, has become the only franchise in the city that has stopped offering its popular Dollar Menu.
These are only the latest developments in a city where the Mayor Gavin Newsom sailed into office on a platform known as Care Not Cash that severely limits cash assistance to the homeless.
All these laws and ordinances are presented to the public as serving the greater good, making cities more livable, improving public safety — in a nutshell, increasing quality of life across the board. Residents’ quality of life is enhanced because they live in safer, cleaner cities. Businesses are able to attract more customers. Cities themselves are able to attract more tourists. All in all, Quality of Life ordinances seem to work for everyone.
Quality of Life is, of course, a well-chosen phrase. It has a nice ring to it, it sounds upbeat and profound at the same time. Who could possibly oppose such a thing? One group might be those who care about social justice and our collective responsibility towards the economically marginalized — the exact people who are, more often than not, on the receiving end of Quality of Life initiatives.
Clearly, Quality of Life refers to some lives, the lives that are worthy of legal and public protection. Other lives, on the other hand, do not seem to fall into this category. As in most instances, these ordinances have proved to be detrimental to the health, opportunities, and daily lives of people experiencing homelessness and those of lower socioeconomic status.
In fact, it appears as if Quality of Life is a zero-sum game: I can only increase mine if I decrease yours. For a growing segment of our country, these initiatives simply institutionalize the inequalities of life.
At first glance, these ordinances and policies might seem like a rather extreme form of NIMBYism. City residents, who may not have a problem with the poor or poverty per se, are offered a way of not having to think about them, see them, or interact with them. In the larger scheme of things, however, what the Quality of Life movement really represents is a modern take on old-fashioned segregation. 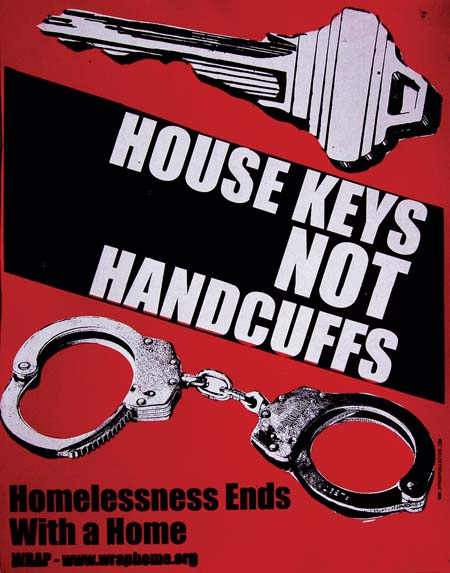 The resulting laws and regulations serve as judgments about who can and who cannot occupy public spaces, about who is free to go where and do what.
Reminiscent of urban policies from a dark era of American history, they share many similarities with their Jim Crow forefathers. But where Jim Crow laws were explicitly based on race, their contemporary counterparts are ostensibly free from racial bias. Instead, they focus more prominently on socioeconomic markers by targeting the homeless, the hungry, and the poor.
In practice, of course, race and socioeconomic status cannot be separated from one another, and many Quality of Life ordinances affect people of color disproportionately. The Safer Cities Initiatives in Los Angeles is a case in point.
In its three years of existence, this Quality of Life initiative has led to 27,000 arrests in a 50-square-block area known as Skid Row, which abuts a fashionable area the city is trying to redevelop. Skid Row is home to about 14,000 residents: 75 percent are African American, 95 percent are extremely low income, and roughly one-third are homeless.
The initiative has already cost taxpayers $118 million in arrests alone, not to mention the human impacts. Los Angeles spends $6 million a year on the initiative’s additional 50 police officers, which is about the same amount it spends on homeless services citywide. Over a 14-month period, it’s estimated that about $5 million was spent to enforce jaywalking in the area. Things have gotten so bad that Los Angeles Community Action Network had to submit a Color of Law complaint for the Department of Justice to investigate the abuses of the Los Angeles Police Department.
Either way, the principle remains the same: while we as a nation may hold it as self-evident that all are created equal, in today’s cities, some people are more equal than others. In the Land of the Free, there are city residents who are seeing their freedoms curtailed by a growing system of measures that essentially defines them as second-class citizens. This process of stratification is based, as it has been in the past, on valuing the rights and privileges of some while denying or stripping away the rights of others.
Undoubtedly, a Quality of Life initiative has either already come or is on its way to a city near you. Public discussions on these initiatives are typically held in a vacuum with little perspective, historical or otherwise. (Keep the chart above in mind when your Mayor or Chamber of Commerce promises that a Quality of Life ordinance will bring prosperity and security to your community.)
The resulting legislation tends to ignore its implications on deeply held values such as freedom, opportunity, fairness, and equality. These political developments ignore the bigger picture — that this quest for safer and cleaner cities has been harmful to the lives of many Americans and a violation of fundamental democratic principles.
Paul Boden is the organizing director of the Western Regional Advocacy Project (WRAP).